Richard, our local hero in the Dominican Republic, was hosting me for a day and a half.  He

wanted to show me the Cuevas de las Maravillas which is just west of La Romana and is designated a national park.  I have been to a few caves in my time.  I remember well the caves near Nerja in Spain and the Postos in Slovenia.  Limestone plays fantastic tricks with water underground!  This was going to be a bit of an adventure.

Our first and minor obstacle were that the caves were closed on the day we were going to be visiting.  Richard, in his charming
Dominican Spanish, disturbed a guy from a siesta and asked him if there was any way that he could let us into the park and caves.  The “transaction” was done quickly and before you know it the gates had been opened and we were walking along a path with a stone wall on either side.  After about ten minutes, the first surprise came.  On both sides of the wall, hanging around on trees and munching away on plants, were iguanas or baby dinosaurs, I’m not quite sure.  Lots of them though.  That prompted me to inquire if there were any venom issues – apparently not.  Eventually, we got to the opening of the caves, all quite civilized, and then began the 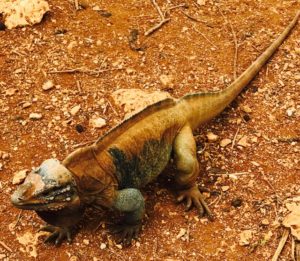 descent.  Inside the cave, there are about 500 paintings and engravings on the walls all made by the Taínos, the ancient inhabitants of the island and in general, most of the Caribbean.  There were human faces, animals, and geometric figures.  All pretty basic stuff but all incredible given the time period.  It is a rare photograph of life just before Columbus arrived.  Of course, as is the case 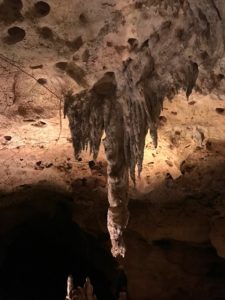 with all of the native Indians, they got royally (pardon the pun) screwed by either the Catholic monarchy or the diseases that the discoverer’s brought with them.  So now we get to walk through their caves. For me it was a fabulous travel moment – alone, no tourists, just the guy who opened the door for us, and the only noise was the dripping of water through the stalactites that are endlessly fascinating and at the same time you wonder if today is the day that they will fall to the ground.