Colmar was such a surprise.  I had no idea what treasures were there.  We had decided to go

Colmar because the famed Unterlinden Museum had some extraordinary medieval polyptychs from the early 1300’s.  The masterpiece was the Isenheim altarpiece.  My mate loved this stuff so frankly, he dragged us all there and what a pleasant and wonderful surprise it was.  In addition to these spectacularly colorful paintings, there were a scattering of Picassos and the museum held one of the three tapestries of La Guernica.  As for the other two tapestries – one is in Japan and the other is owned by Nelson Rockefeller’s estate and is constantly out on loan. 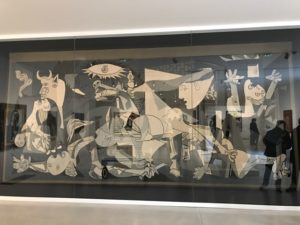 I didn’t know that this delightful town was a spectacular assemblage of Hansel and Gretel half-timbered houses that wound around the narrow streets and along the canals that crisscrossed the city.  The colors of these quaint houses were amazing, almost surreal.  We took what essentially was a punt boat with an electric motor and silently weaved our way

under low bridges and gardens that backed onto the canal.  It looked and reminded me of Little Venice in London.  How had I missed this place on my prior travels?  It’s old brick marketplace, it’s completely authentic feel, it felt, unlike any place I had ever been to.   It definitely did not feel like France but they sure spoke French!  It was one of those places that had been trading nationalities for well over a century.  It was Alsace.