Strolling through the Centro Storico in Naples is a trip within itself.  I was on the way to the Naples National Archaeological Museum 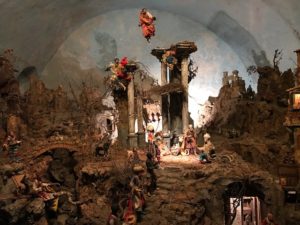 but had to stop along the Via San Gregorio Armeno to check out the pedestrian street laden with a combination of kitsch nativity scenes and the real stuff.  They’re called presepe which essentially means “a crib.”

This is where every single Neapolitan family comes to at Christmas time.  In fact, my Italian friend told me that pretty much everyone in Italy has some kind of glass enclosed nativity scene that has been handed down or is part of the family treasure.  These things are wild.  Some 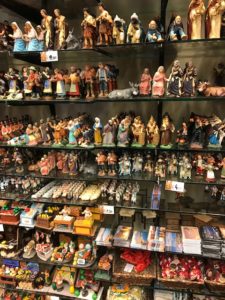 of them have intricate waterfalls and the possibilities to extend across the room like train sets.  The price ranges from the basic model for 50 Euros to over 10,000 Euros for elaborate ones.  But for Italy, it is not just Jesus, Mary, and Joseph in these scenes, there is a whole hobbit village created around the manger with trees, vegetation, waterfalls, windmills, you

name it.  They can be made of terracotta, wood, and cardboard.  Even my communist friends have a presepe!  But to note, Jesus is always the last to enter the scene and is only placed in the manger on Christmas Eve.

Some of these nativity scenes are simply breathtaking works of art, and some of them have odd characters like Maradonna, Naples’ most famous soccer player, hanging 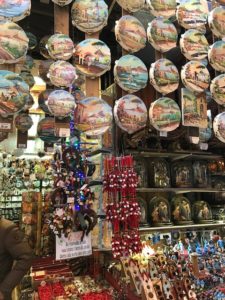 out close by.  Neapolitans love football more than anything so why shouldn’t they incorporate their most famous (albeit an Argentinian) into their presepe tradition?!  Onwards and upwards to the National Archaeological Museum I went.