I have always loved Spain. I first went there during the Franco era in a very beaten-up car that barely made it across the border. It was all beaches and Paella. But my favorite memory is a trip I took to the White villages (Pueblos Blancos) a few years ago. The white villages are a necklace of hilltop villages strategically spread along the Andalusian interior. The road that connects the villages is breathtaking. Arcos de la frontera tips the clue that these places were built along the border between the Moors and the Catholics. Painted white because of the heat in the summer and breathtaking because like good border defenses the towns were nestled in the mountains and hills of southern Andalusia.

When we visit Granada, Seville, and Cordoba we get a fully sculpted picture of the influence of the Moorish occupation. Cathedrals and churches converted from mosques but still retaining are some of most stunning interior architectures.

One of the bigger towns, Ronda, that boasts a fabulous gorge, has a bridge that connects the old town to the new town. There’s a beautiful bullring and some fun tapas bars for the evening 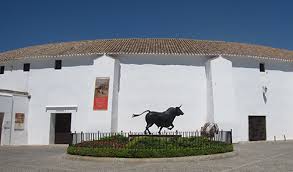 paseo; I had a travel moment. In the back streets we came across a young boy being tutored by an older man in the art of bullfighting. The boy had a cape. He was practicing quietly under the guidance of the older man to move the cape and kneel and turn as if he were in the arena. It was so unreal. Just the two of them. He didn’t see us. He was super focused on the old man who was maybe once a bullfighter. It seemed so out of time. So bizarre but strangely beautiful…there it was. A passing of the baton. A generational lesson. Under a hot afternoon sun not far from the old bullring and a million miles away from everywhere.