Last night a little rough out on the high seas.  Want to be armed with Dramamine.  Today we woke up to calmer waters and rain. The QM2 has 1,292 crew members and the capacity is 2,691.  The maiden voyage was in January 2004 – just about 14 years ago.

Today, people are strolling around the deck, mainly for exercise.  The sights out to sea are unrelenting rolling grayness interrupted by white caps.  Alas no whales nor dolphins nor passing boats to break up the dull vista.  There is no sky to peer through as cloud cover is intense.  Today I am off to gym again but yesterday five machines were out of order.  I’ll be heading to a lecture at the theater here that i wanted to go to.

Also today we will move another hour forward as we gobble up the time difference between the US and the UK. The captain came on to announce very causally that there had been a fire somewhere overnight and that various stairways were shut down. Nothing to worry about he said so life continues.  Breakfast ends early (9:30 am) at the waited seating and after that it all goes down to self serve.  It is a little messier and less comfortable.  The internet continues to be relatively hopeless and expensive.  Minutes disappear faster than the setting sun.  Off to connect and take some photos.  A giant whale would be handy. 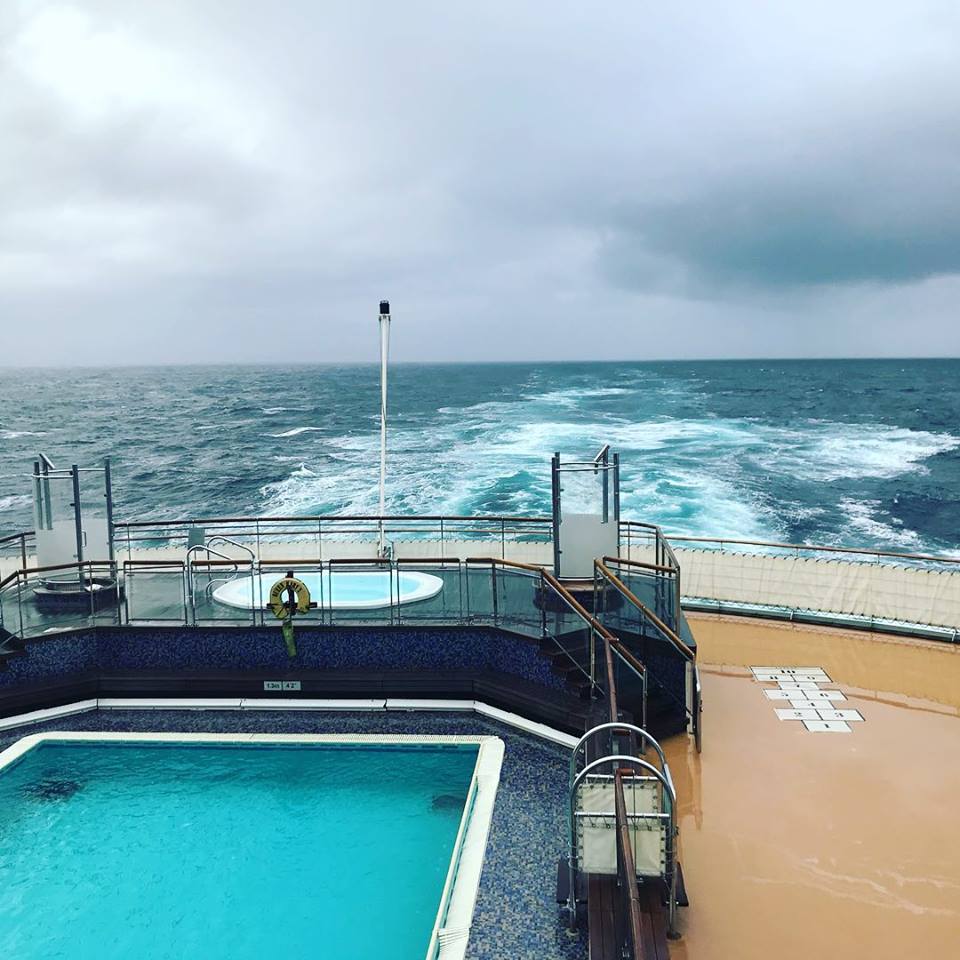 Saturday showed much calmer seas after a rough night.  It was a night of Dramamine and deep breathing for me.  The secret to sea sickness is to be in center of boat down low.  We are at the top in the front.  The forecast ahead is smooth sailing.

We saw Maria Friedman today.  She did a one woman show on Sondheim and Bernstein. We actually saw Merrily We Roll Along at the Huntington Theater in Boston recently. She directed it! She did a wonderful condensed show of Sondheim songs primarily. What a lovely lady with an extraordinary career and a fabulous voice.  So fortunate to have her pass the week on the crossing with us. Chatted with her by the elevators and she is moving Merrily We Roll Along to New York City soon. It was such an amazing coincidence to see her!

Took to the open promenade for a long walk. We are slowly adjusting to life without internet connection and lots of time on our hands. The walks along the outer perimeter of the boat are quite amazing. The temperature outside is balmy and miles away from the freeze on the eastern shore. Here we are soaking up warmer temperatures and Atlantic rain. Still nothing has been sighted except white caps.  But I am slowly getting used to the nothing vista and the beat of the crossing. Gym and spa every day to ward off temptation of endless mounds of food. Dance routine after dinner plus disco.  Late night ahead. 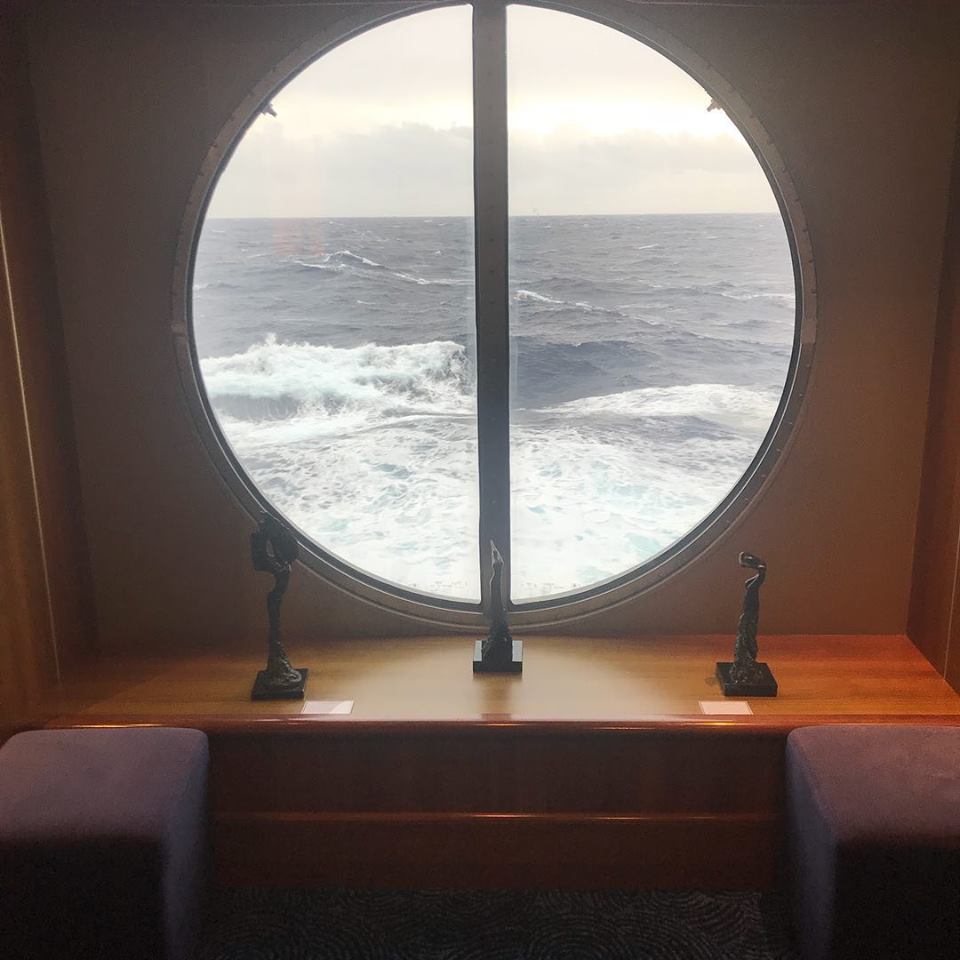 I have been slowly adjusting and as of Sunday I am starting to evolve into a crossing type! I see the allure. It’s just a nice way to pass the time and it forces you to disconnect from everything.

Announcement from deck this morning called for us moving another hour forward.  We slowly make our way to the British time zone. After a morning of not much at all, we drifted into a lecture on Jack Vetrianno and Fabian Perez.  A really interesting talk about two painters, one Scottish and the other Argentinian. The art gallery on QM2 is stacked up with good stuff. It’s all stocked somewhere below and the collections change every day. The setting is just a dream for the collections too as the waves splash across the porthole windows. Perez is a really cool painter and Vetrianno is the bad boy of modern painting!  Actually loved his stuff but Perez was a great guy to pair him with.

After an interesting chat with the two curators we moved on. For me it was the gym and the spa which I have grown to love.  I like the availability of it and the knowledge that I know how to work everything.  Every day becomes part of my routine.  It’s a good investment for the week. Tonight we went to another curated nighttime show on Broadway and the 1960’s.  We snuck into the front row on the side and what a great show it was. Everyone spills out of dinner and drifts into shows at the end of the day.

The casino was humming, the nightclub noisy and fun, and everything is going full belt.  I am loving the rhythm of the crossing.  Can’t believe I just said that!  The internet is still hopeless.