I had a credit from the Hotel Madeline in Telluride, CO.  They were kind enough to roll the 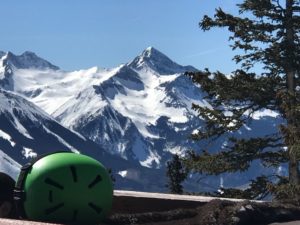 credit from a canceled reservation a year ago over to a new reservation this year.  So my son and I hit Telluride.  I had never been before although I had heard lots about it.  We both love to ski so this seemed like a perfect storm.

Getting to Telluride is not easy.  It’s more or less impossible to drive from Denver (6 hours) so a flight to Montrose Airport is the usual way in and that’s what we did.  Montrose is a strange place.  One hour and a half drive from Telluride, it couldn’t be farther.  There is a great diner there, Starvin Arvins, where the eggs and corn beef hash are exceptional.  The waitresses all wear pumps and the clientele can look very different to us folks from the eastern 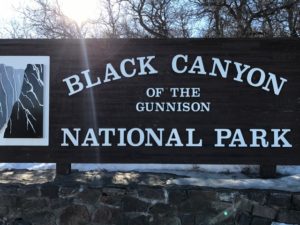 territories.  Not more than 20 minutes from Montrose is Black Canyon of the Gunnison National Park.  The canyon is as deep as the Grand Canyon but not as wide.  It was spectacular in the early morning mist to see this giant chasm in a national park right next door to a very bland, modern town like Montrose.

An hour and a half later we arrived in Telluride. The town is really two towns. Mountain Village is essentially the new town.  It’s built along the lines of all American ski resorts with plenty of large fire pits, bars, and fake old new buildings.  However, it was functional and had great access to the lifts.  The Hotel Madeleine was right there – literally just a hop to the lifts.  We were taking advantage of my credit.  Actually, the hotel itself was a bit of a standout.  It had a nice pool, although not big enough to do lengths in, fabulous twin outside jacuzzis, a great steam room, and a slightly overpriced breakfast buffet.

There is a gondola that serves the new town and the old town.  It runs from early in the morning to midnight.  You can ski off at the midpoint or simply use it as public transportation between the two towns.  I loved this facility.  It’s also free and paid for by the state of Colorado as a form of public transportation.  I always think of great moments in travel like the Venice motor launch in from the airport.  This was one of those moments.  At the end of the day just before sunset, we would ride the gondola down to the old town.  Telluride is high up at 13,000 feet so these trips were spectacular and the ride down was thrilling every night.

I really loved this place.  Loved the old clipper mining town and the restaurants down there.  We ate well every night and the tacos at Taco Del Gnar are cheap and amazing.  There was an Italian restaurant close to the gondola that was good but not standout.  But everything was amazing every night especially Rustico and 221 South Oak.  At the top of Telluride, there is a fabulous place to break up the day called Alpino Vino.  It’s the highest restaurant in North America at 13,000 feet.  On a sunny day in the right place and a great table, you can see forever.  Telluride has a population of 2,000 people, seven dispensaries, and some of the best skiing in the Rocky Mountains with great restaurants.  Something for everyone.