So I travel a lot and I love trains.  They are simply better in Europe than anywhere else –
efficient, convenient, and quick.  Frankly, it would be impossible to get much worse than an Amtrak train or even the so-called high-speed version, the Acela.

But I do have some complaints on European train stations.  Firstly, for all of its glitzy grandeur, how did they invent the terminal at St. Pancras in such a lousy way?  St. Pancras offers all of the familiar shopping mall amenities outside the terminal, but once you get inside and pass through security, you are locked in a tiny little world with one bad coffee shop and a badly stocked newspaper place.  That is it.  While I love the beauty of riding between London and Paris in a superfast train, I just think that they can do a better job of tidying up the stations at the end.  On the other end, the Gare du Nord is one of 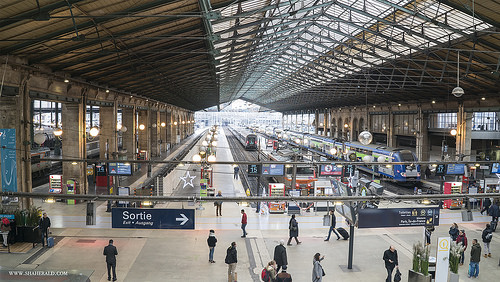 the saddest examples of how not to make a great impression on your visit to such an amazing place like Paris.  And it feels seedy, the taxi set up is appalling and you know that someone is specifically out there with a view to ripping you off.  Of course, it happened to me.

This time it was the taxi scam.  You wait in the taxi line, you get to the cab, you jump in the cab, and then you notice that the taxi meter, as you are driving through the streets, has €50 stuck on it.  If you have made that trip before, you look at that €50 suspiciously.  When you ask the cab driver if there is something wrong with his meter, he happens to say, “No monsieur, you are in a premier taxi.”  You ask him what is premier about this taxi as you lined up with everyone else on the regular taxi stand – not a premier taxi stand.  He only restates that you are in a premier taxi.  So more or less, in French, you say, “Listen man, I am not going to pay you €50.  I know the fare is supposed to be €15. But I am most certainly going to call the police.”  The gauntlet is down.  He either stops the cab and kicks you out in the middle of nowhere, or he gets it.  This cab driver got it and delivered us to our hotel.  I gave him €15 and told him I was the Angel of Death.  Bottom line – check the meter when you jump in a cab!