I had recently switched my iPhone case from the beloved Tech21 to Apple.  Boy, I loved those Tech21 cases.  You could throw your iPhone in the air 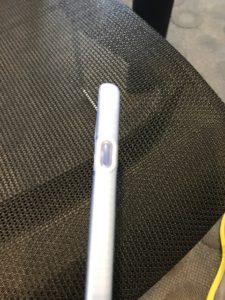 and watch it slam down on a piece of concrete and nothing would shatter.  In fact, when I first went to the Apple Store to invest in one, the guy gave me the sales pitch on the Tech21 and told me it was shatter-proof.  So, I took the case, put it on my iPhone, threw it up in the air, and watched his face in horror as the phone landed on the Apple ground.  Guess what?  He was right.

But now Tech21 has broken their promise in providing the case that is perfect in every way.  The new case, for some ungodly reason, has the silent button opening designed for a five-year-old or people with micro fingers.  Seriously, guys, I use that switch all the time!  It’s a shame.  I’m not saying that you should take the designer who designed the new case and march him/her out the door, but maybe you should check the fingers out on this person.  They sure 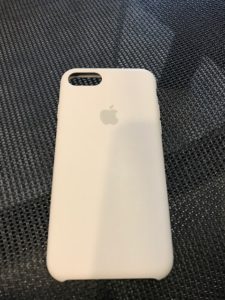 cannot be ordinary fingers.  Or else this person just prefers the “Do Not Disturb” crescent moon symbol.  Living dangerously if you ask me when you are at the theater.

So, Tech21, I abandoned you.  I went looking for an Apple case and invested in their silicon line.  I like it because when you leave your phone on the arm of an airplane seat during landing, it does not slip off.  It stays put easily.  I also like it because I can access the silent switch with ease.  But when I started to use it, I noticed that the

silicon began to wear on the corners.  What a drag.  I have an Apple Store near me and I walked in expecting some kind of interrogation on receipt verification, the usual sales obstruction stuff, etc.  But instead, the guy told me to go pick out a new case and we would just do a straight switch.  Or if I wanted the money back, he would just transfer it back to my card.  The whole transaction time was five minutes.  Brilliant service.  Hey Tech21, change your design.  I will still leave the door open for you.  Hey Apple, you’re the best.