The World Travel Market (WTM) takes place every November out at the ExCeL London convention center next to the O2 – the huge entertainment complex that was developed around the Millennium. The World Travel Market is a fun event. It’s a chance to run around the world in a huge auditorium, to network, to research new destinations, and to catch a view of the city that stretches out along the Thames River beyond Canary Wharf to the outer edges of what is called the Thames Barrier. This is the new London – encompassing the financial center, the Olympic Park, and the ExCeL London. It is also the home of London’s City Airport and will be the home of around 20 new businesses over the next five years.

One of the highlights of heading out to that part of London is grabbing the Emirates Air Line.  This cable car links across the River Thames and East London. You board the cable car not from North Greenwich Underground and it delivers you to the ExCeL. It’s about a 10-minute journey and during the World Travel Market, as long as you have your badge on, it’s free! This is one of the great rides across the outer banks of East London that you can take. A prelude to your ski adventures in the new year.

I popped into London for a couple of days, primarily to check in with mum and to do some other business. I love London! I had arranged to meet with her over by Hampstead Heath, a feast of childhood memories for me. Hampstead Heath is a real wonder in the center of London. It dates back to 986, was bought by the City of London in the 19th century and has been protected land for Londoners to enjoy ever since. 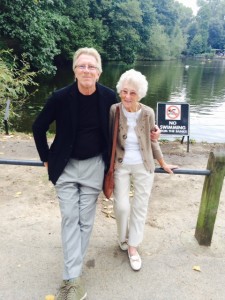 I jumped on the 24 bus and jumped off at the bottom of the hill that leads to the Heath itself. Unlike the Royal parks, Hampstead is a wild and rambling forest-like place, beset with a necklace of ponds nestled amongst the hills and valleys that comprise acres and acres of endless walking paths. My mum used to swim in the ponds of Hampstead Heath. In those days the ponds were separated into male and female. In these most liberal days they are now mixed! This is where Londoners retreated in the 17th Century to avoid the Great Plague. They even called one of the ponds, the “Vale of Health.”

We walked to the top of Parliament Hill, from the Heath side, and there was the view I almost remembered as a kid. The skyline has changed so much, modern buildings like the Shard and the Gherkin, provide a spectacular vista of the new London. London’s skyline in the distance, only 4 miles away and yet we could have been in another world. 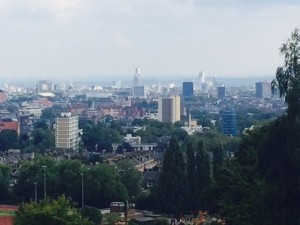 Nowadays the houses that abut the ponds have this wonderful disheveled upmarket feel to them. The stately house of Kenwood serves as an anchor on one side of the Heath, while on the other is the running track and open air swimming pool, providing recreational space for London’s summer needs. I remember the fairs at Hampstead Heath, fishing in the ponds, long walks through the acres and acres of woodland and biking clear across to Highgate. All of these places became my backyard. We had no garden; we didn’t need one. We had Hampstead.

We finished our day at the pub by the railway station and I took the 24 double-decker back into town. I thought to myself what a wonder it is to have a space like this in a busy metropolis like London. There’s a whole debate right now about the new Garden Bridge project in London. On one hand you have the desire to protect London’s cherished architectural landscape, on the other hand you have the greening of London. The Garden Bridge promises to be an iconic tourist attraction and something for Londoners to enjoy as they cross from North to South on a lazy Sunday afternoon. I love this idea. It’s probably one of the most exciting concepts out there at the moment. It’s funny really. Hampstead was probably its inspiration.