I had planned a ski trip with my son to Colorado’s Telluride.

I even booked a room at a cool looking hotel, the Madeline Hotel, and paid a nonrefundable deposit. We were all set to go.  But frantically, my son kept telling me that Colorado had one thing missing and that was the snow.  It seemed to have more rain than snow and the conditions were looking London-like; not what you tend to think of when you imagine Colorado skiing.  Add to that a New England winter where we had barely a dusting and I was imagining that global warming was catching up with my winter activities!

What to do then?  At the last minute, my son, who had taken on the role of a meteorological expert, spotted a storm from the Pacific that was heading right for Tahoe in California.  I hadn’t been there for years but this sounded like a plan! California skiing!

The first thing I had to do was call the hotel in Telluride and see what kind of deal they would give me.  After a couple of phone calls, it turned out that a nice guy who understood the dilemma offered to give me a full refundable credit with a one year expiration date.  Very cool service I thought.  I will be getting to Telluride within the next 12 months to enjoy the beautiful town and what looked like a beautiful hotel. It was a smart move. I have told more people that this hotel is great…and I have not even stayed there!

In the meantime, I reconfigured my flights, flew into Reno, met my son, drove in a four-wheel vehicle up to Tahoe and within 20 minutes we encountered the blizzard that would stay with us for two and a half days.

It was enough snow for a season and we got the weekend of weekends!

Yes I did manage to ski through the blizzard-like conditions, hit the powder awkwardly at first, and waited for the sun that eventually came out on Monday.  What I did get was this extraordinary appreciation of Tahoe’s ski location.  We skied Alpine Meadows three times, Northstar once, and Squaw Valley once.  Some of the vistas from Alpine Meadows across the lake were unbelievable.  We stayed near Tahoe City which is a delightful city courtesy of a great Air B&B.  I had dinner at Sunnyside Restaurant where the fish tacos were brilliant and service was fantastic.  Everything and everybody was about the conditions. Alpine was the favorite with the pure connoisseurs. It’s just got that air of non-gourmet authenticity about it. Not sure how well it will hold on to that when they connect Squaw and Alpine together next year.

Everybody seems so basically very cool.  You drop into the bowls and cruise the corduroy and such. On the lift at Squaw Valley I was with a whole bunch of people of mixed ages. My son had wandered off to some black trails and I was just hanging solo. Some guy asked if I had been here before.  I told him I came through here hitchhiking in 1972.  Everyone looked at me.  The older guy said, “Wow, far out man,” and the younger kids just said, “Cool man! What was that like? ” Honestly I felt like I was a relic reporting from the hippy trail.  It was like a scene from the movies and that was what hitching around in ‘72 was basically like. One VW van too many. Glad I made it through and happy to make it back to Tahoe again! 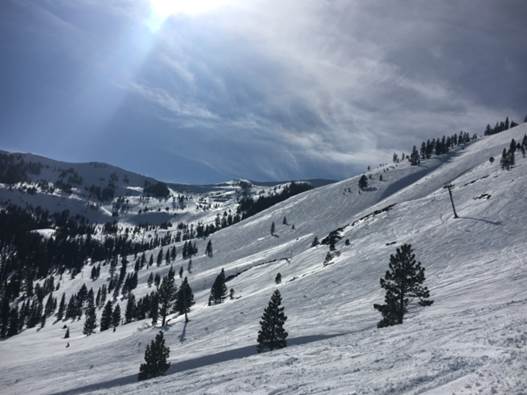 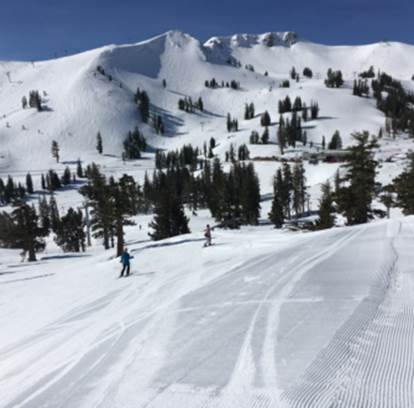