What do all of these cities have in common apart from being really cool places to visit?  Yes, you’ve got it – they are all connected by high-speed train.

Here’s the problem.  The Eurostar, which connects London and Paris, takes precisely two hours and twenty minutes to cover the 306 miles journey.  From Naples to Rome, it takes a quick 67 minutes to travel 116 miles.  But the Acela train from Boston to New York on good old Amtrak takes three hours and 40 minutes to travel 215 miles.  That equates to nearly traveling at only 60 mph!  The Europeans are going to continue to surpass us in train travel as the distance between cities in Italy is about to get considerably smaller in time terms as they get their super fast fleet of new trains.  These trains will travel around 400 km/h (or around 250 mph) which means that it will take about two hours to go from Rome to Milan. 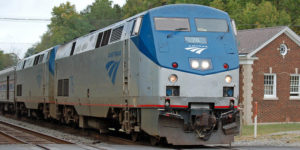 So the question begs, why does Amtrak have horrible, unreliable, and slow service?  We are held to ransom by the exclusivity of the airlines.  This is a pretty sad reflection, but the Europeans understood the power of train travel, along with the Chinese and the Japanese, and have invested billions of dollars in constructing an artery of high-speed travel that is more energy efficient than jet fuel airplanes, more passenger-centric (city center to city center) than airplane travel, and frankly, more comfortable and fun than airplane travel.  Let’s face it, when was the last time someone said, “Well that was fun!” while flying from one city to another in coach while experiencing massive delays and terrible service.

So why oh why doesn’t the government invest in Amtrak?  Why is the fleet so appalling?  What is a more attractive option there than a high-speed train from DC to New York or Boston or Los Angeles to San Francisco?  Imagine what fun it would be to take a high-speed train from New York to Miami.  1,280 miles away, using a 200 mph train it would take just over six hours.

I only wonder about all of this because it makes no sense.  A guy in front of me as we walked out of the terminal in London off the Eurostar said to his wife, wow, imagine this journey on Amtrak. Indeed!  A horror show. European travelers can commute between Rome and Naples or Rome and Florence or Paris and Marseilles or Paris and Cologne so effortlessly.  If you get the chance and you are traveling out there, get on a fast train and try to dream or imagine that one day Amtrak can be like this.  The Dream on! The President has just cut funding.  Oh well.  See you out there somewhere.  They even wrote a song about it!

Gimme a ticket for an aeroplane
Ain’t got time to take a fast train
Lonely days are gone, I’m a-goin’ home
My baby, just-a wrote me a letter