As a confession, in Greece, I have been to Athens and quite a few Greek islands – Mykonos, Paros, and Symi, my favorite in the Dodecanese – but I have never been to the Peloponnese Region. Which means, rather tragically, that I have never been to Delphi, Mycenae, Epidauras, Olympia, or the island of Hydra. So, in a situation like this, when you find the need to catch up on stuff that you should have done but never did, there’s only one thing for it…jump in a car and go travel.

The drive from Athens to Delphi is around an hour and a half. Shame on me as it is so close. It becomes quite dramatic as you get closer to the ancient site. Actually, there is a ski station, Fterolakka/Kellaria, not far away and there was snow up on Mount Parnassus. Something peculiar in mid-May as the climate across the world shifts its shape and twists and turns. It is strange to look up and see snow and signs for alpine wear this time of year in Greece. Incidentally, one of the coolest areas in Paris, Montparnasse, is related to this mountain! Go figure!

So, on we went to Delphi. The view across the valley is something extraordinary. It’s quite a climb to the top. I can’t imagine what it is like climbing up on a hot day, but the view once you get there is the view of the ages! You start to get the whole picture and you also wonder how they got those stones up there. It’s always better to be a strategist rather than a worker! The museum in Delphi reminded me of the Acropolis Museum in Athens, but less state of the art. It was very well laid out, easy to navigate, and bloody awesome. My advice to anybody going to Delphi is to find a tree, sit under it, and try to imagine that this incredible landscape has remained unchanged for 2,500 years with a whole lot of history in between.

We grabbed some water and headed out; there were other fish to fry today. We drove across the Peloponnese to the western shores of the Ionian Sea and took in the sunset at a hotel by the beach near the ancient site of Olympia. The sunset provided us with a dramatic view of Cephalonia; a beautiful island with a tragic history in World War II. This was the island that the book, Captain Corelli’s Mandolin, was based around. Day 1 was finished,and we had barely started. 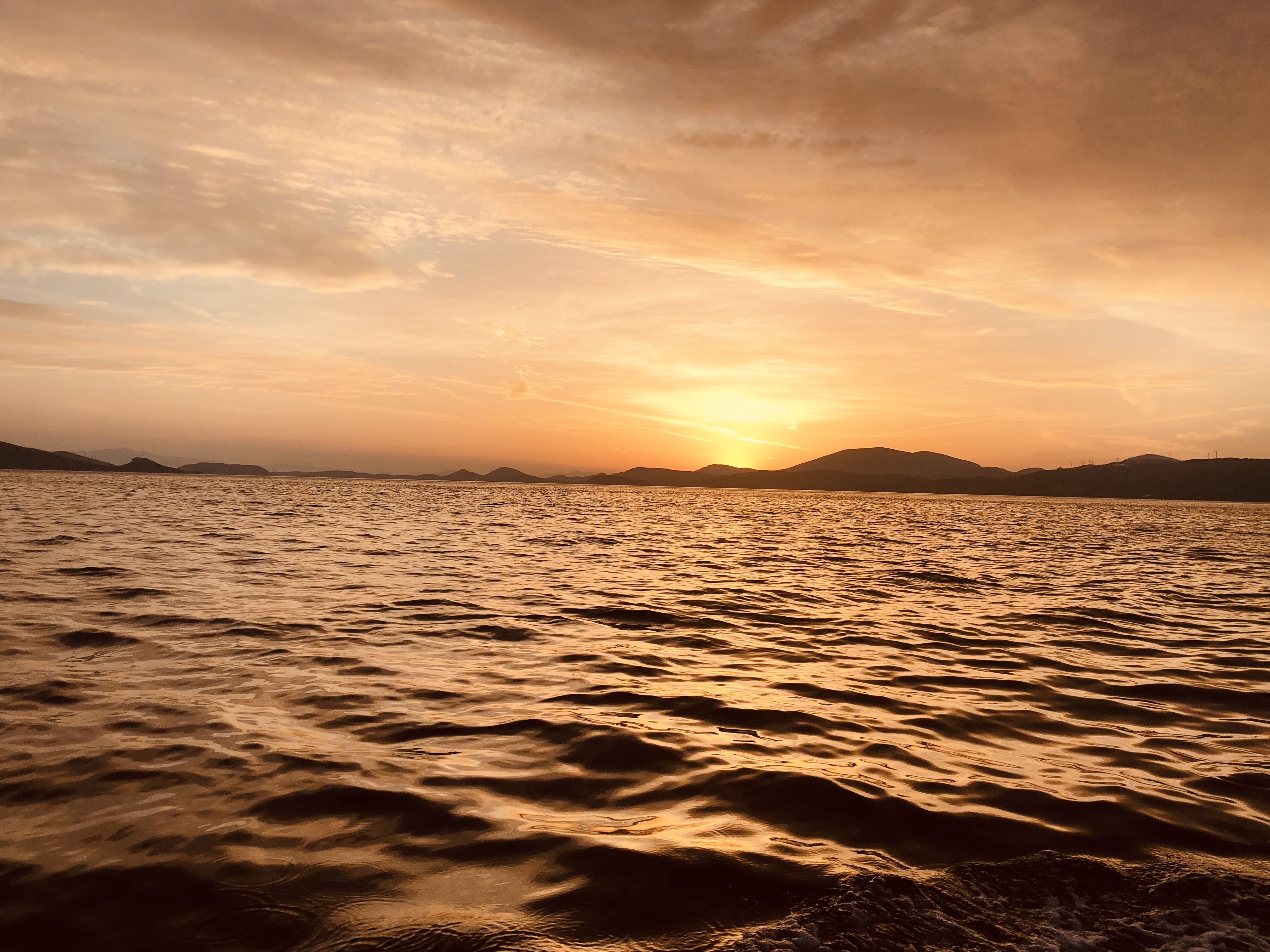 The hotel we were staying at, Aldemar Olympian Village, was an all-inclusive resort where you had to wear a thing around your wrist to get breakfast and dinner. We had done the customary inspection of the hotel, rooms basic but ok, and not much decision making to make on the culinary timetable. It wasn’t really my cup of tea, but it was inexpensive in May and the beach looked quite nice. We had an early meeting with a guide in Olympia and we had to move fast this day because we were taking in a lot of sites.

Olympia is one of those places that everyone should go to. It was a city of peace in a sea of war. The city, located on the western coast in the magical valley of the River Alpheus, was dedicated to Zeus. It’s a city where divinities were worshipped, where the Olympic Games were born, and where the idea of harmony of body and mind, fair play, and the symbol of the humble crown of the wild olive for the victor were created. Pretty impressive credentials. 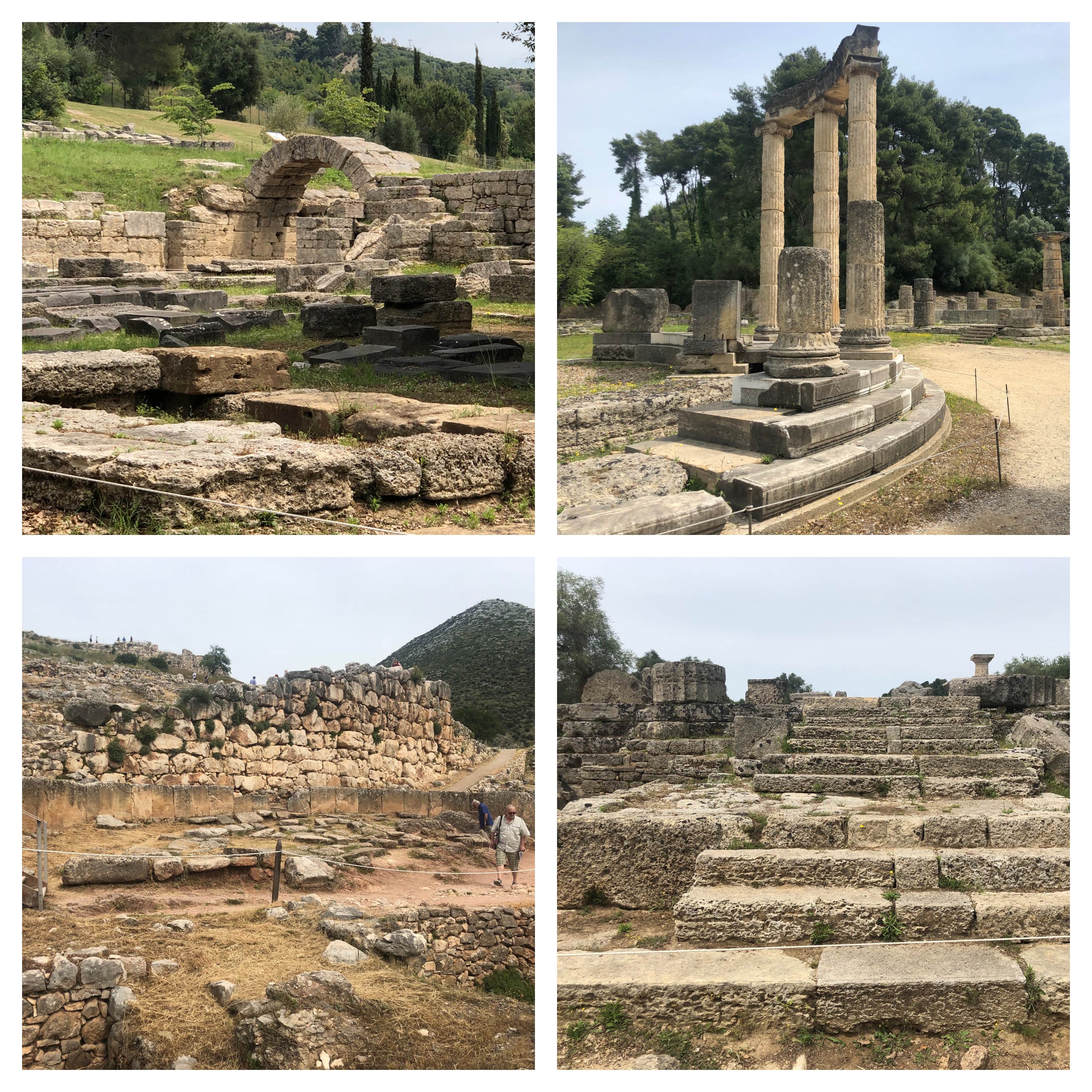 The Olympic Games were organized around 800 B.C. The ancient games sadly didn’t survive the rotten Romans and were officially banned by the Roman Emperor Theodosius in 393. What a killjoy! In the good old days, there were no gold, silver or bronze. No anthem. Winner takes all was the deal and if you won, you got a statue and a podium. Losers walked away with nothing! The Modern Olympic Games were not reintroduced until 1896. During the ancient Olympics, there was an establishment of a sacred truce; a cessation of war that would last the duration of the games. These were bad times, lots of violence and pretty much non-stop war. How strange and ironic that once the whistle had blown, the fighting would stop before starting again once the games ended? I thought of the Olympic games in Berlin in 1936. Literally, three years later the world would be at war with the host nation for five years. How tragic.

We stayed at the site of Olympia for a while. It was fun to watch some local children run the original Olympic track. 200 meters long and host to the ancient sports of the time – running, jumping, discus, javelin. The tunnel to the old track reminded me of the tunnel used in soccer games today. I tried to imagine how amazing this would have been. We were racing too and thanked the guide who was wonderful and jumped back in the car.

Next stop was Mycenae. This city was built during the last phase of the Bronze Age and signals the beginning of our ancient civilization. This was where it all started nearly 3,500 years ago – engineering feats we cannot imagine, mathematics, and writing. It all started right here. It’s strange when you travel through this part of the world. You feel the gods around you. You feel history unleashed from the confines of museums. It’s scattered in the ancient fields, a column across the ground that once stood tall, marble with ancient scribe on it, and the vistas – hauntingly unchanged.

We continued on to Epidaurus to see the famous amphitheater. I sang a song in the center of the great auditorium and climbed to sit on the top stone of the ancient theater and looked out across the countryside. I imagined the same view preserved through the ages. Exactly the same view in this same amphitheater where performances played out nearly 2,500 years ago. Imagine under the beautiful soft Aegean light how extraordinary this must have been back then. Today, the theater is still used because of its remarkable acoustics. In its heyday, it held 13,000-14,000 people. Art encourages wellbeing. The Greeks knew this. They were right. Never give up! 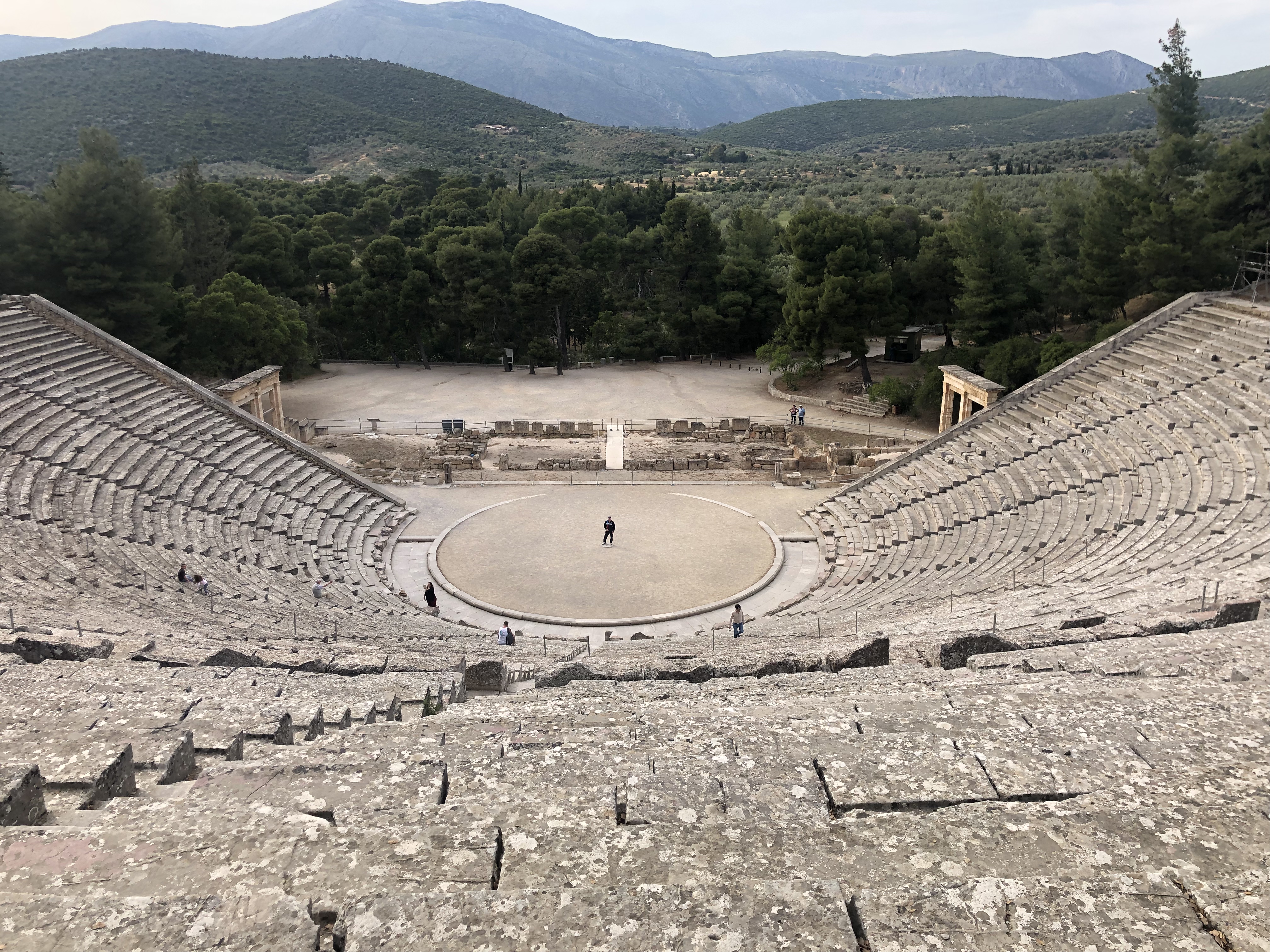 The last leg of our journey was to the coast. We drove through tiny villages and the road twisted and turned. There were lots of sleeping dogs suddenly awoken by our car and we had to get directions from some locals playing cards when we took a wrong turn. An old fishing boat was waiting for us at a remote location that would take us from the mainland to the magical island of Hydra. It was like an old James Bond movie!

Hydra is a place to be visited and to spend the night when all of the tourist ships have gone and all of the donkey rides have been taken. The charm of the harbor and the island itself synched with a beautiful sunset is enough to take your breath away. There are no cars on Hydra, lots of donkeys and boats in the harbor. The island has some nice hotels and great restaurants. The horseshoe harbor is stunning at sunset. It’s a great place to set down, relax, read and take some wonderful walks. The nightlife is buzzy, and as everything is clustered around the harbor and its backstreets, everything is very accessible. It is just a short ride on the ferry back to Athens. I recommend spending at least two nights here. Nearly enough time to let the world pass by. The hotel I stayed in was the Bratsera Hotel. A wonderful hotel tucked just away from the hustle and bustle of the harbor. Breakfasts are amazing there! 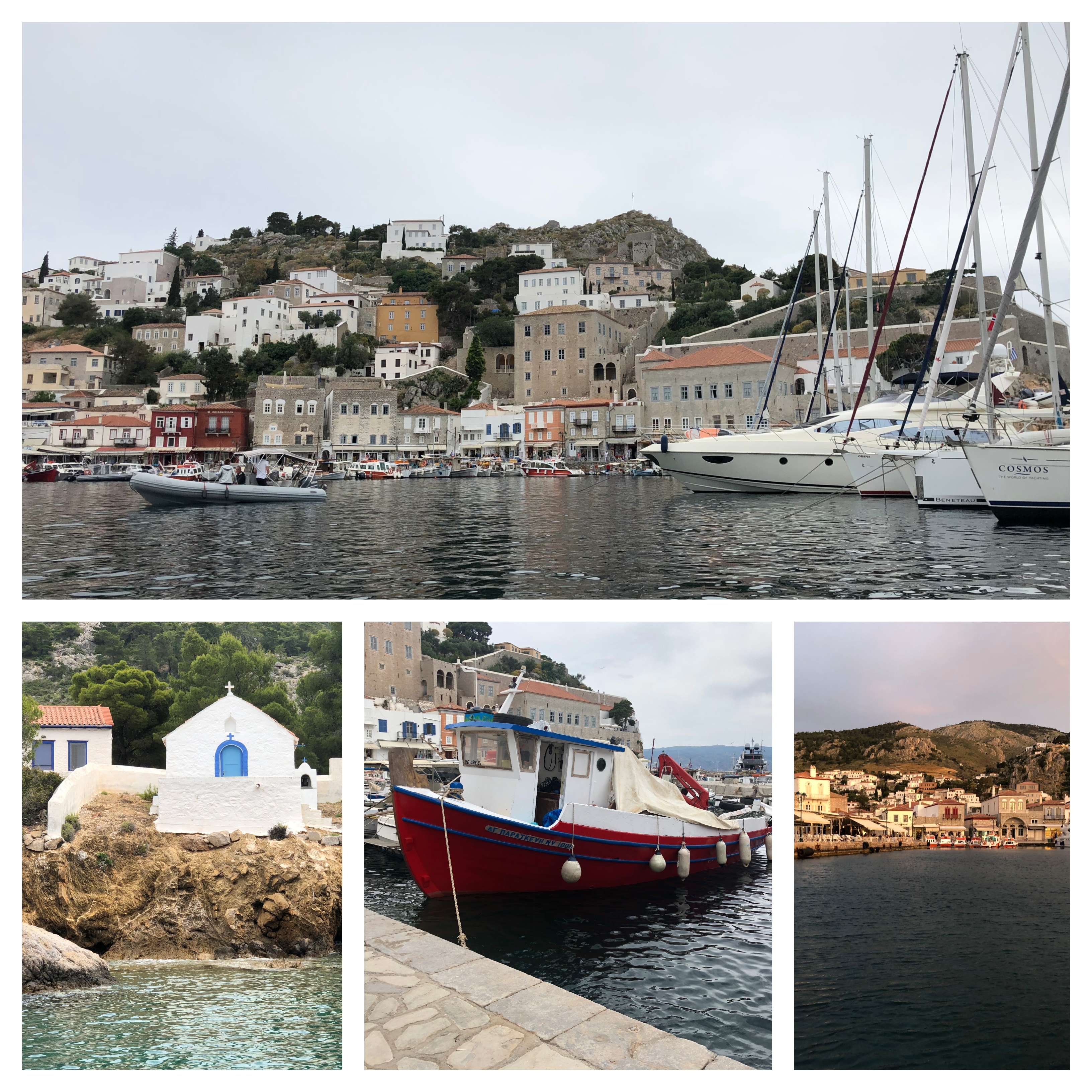