FIFA is the organization responsible for the governance of soccer worldwide.

It sponsors tournaments directly, like the World Cup, and is responsible for the adjudication of the game. The rules, the referees, and the technology that helps make decisions better. Under FIFA’s umbrella are the various worldwide regional bodies like UEFA that control the soccer programs and tournaments of the continents around the world. In other words, it is a pretty big deal!

So of course the scandal of FIFA over the past couple of years has created great focus on how much money moves in and out of the pockets of the various people who run this organization.

They make money on scams for tickets, bribes for tournament venues like the World Cup, not to mention, the extraordinary wages they get paid and the perks of being part of this secret society of FIFA. Thank goodness for the Americans. They came along, busted a whole bunch of guys, and currently have extradition notices on a number of the top FIFA officials that pocketed more money for one deal than most of us see in a lifetime. The chief executive of FIFA, his assistant, and the chief executive of UEFA have been suspended from anything to do with soccer for six years or more. These disreputable folks who have assaulted the beautiful sport of soccer and turned it into a mafia-driven money laundering vehicle, will probably get away with most of the charges and sit gracefully by their Swiss lakeside chalet houses counting their grubbily earned Swiss Francs. It is a pity because soccer is the fastest growing sport, it is a beautiful game to watch, and in America especially we are getting hip to the intricacies and fun of playing and watching this worldwide phenomena. So as I was driving from Tasch, Switzerland, to connect to the car train through the mountains, I could not help but stop the car and look out into the distance where I saw the Sepp Blatter Primary School in the town of Visp. Wow, I thought, this is where they teach the kids all of that stuff!! Seriously though, Sepp Blatter who was the head of FIFA until he was unceremoniously disposed is from the town of Visp. It is not a very special town but it is a main hub for the various trains that comprise the cog railway system and the high speed intercity trains that connect ski paradises to Geneva and Lausanne. I guess he also put a lot of his “hard earned money” into education. Amidst the mountains and the lakes, this guy even got into the primary school. At least some of the dodgy money went to a good cause! Let us pray for better days at the top of our beloved sport. 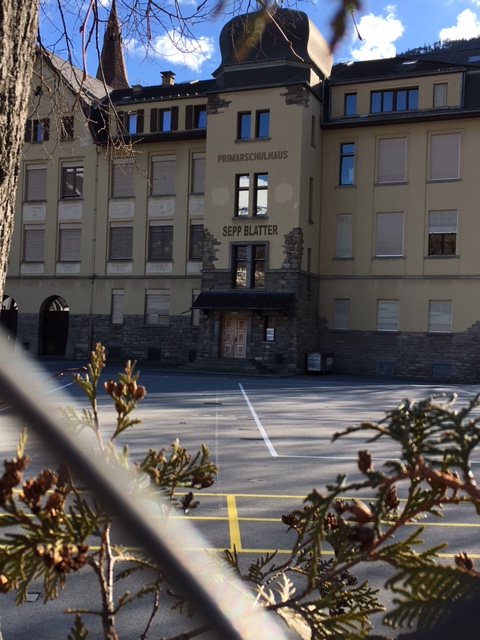