The excursion spiel was that we would ride four-wheel trucks in convoy, in a jaunt in the desert.  It frankly sounded like the caravan of gondolas that you see when you walk across the bridges of Venice and look down as 100 tourists are being serenaded by disinterested gondolieri.  In other words, I had my gondolieri radar on high alert.  We put on our helmets, submitted our driver’s licenses dutifully, piled into a whole bunch of trucks, and off we went.  After all, we were in the West Bank and there was nobody around except for us.  It was amazing.  Not a tour I had thought.

We took pictures and of course there was, out of nowhere, a Bedouin and his son with two camels.  That took us on a short journey and back.  There were some caves, a lookout point across the hills to Jerusalem and on the other side to Jericho.  For some reason, we lost the light and ended up driving back in the darkness, passing a couple of Bedouin villages and feeling a little vulnerable I must confess.  A couple of the cars broke down but were easily repaired.  At some point, we had to bail out of the desert and get onto the super highway to cut short the trip because we had run out of time and daylight.  Imagine a trail of vehicles doing 20 mph on a 70 mph modern highway.  It was a funny end to a phenomenal day.  We concluded with a campfire and a typical dinner with what looked like roasted lamb but could have been goat and had been cooked in a clay oven.  That, and the usual lashings of hummus, and I must say, it was a perfect day. 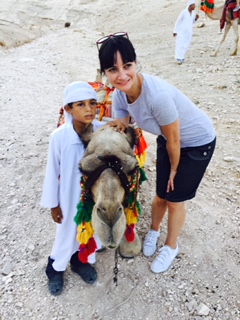 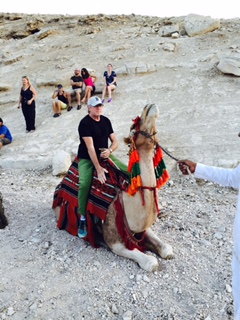 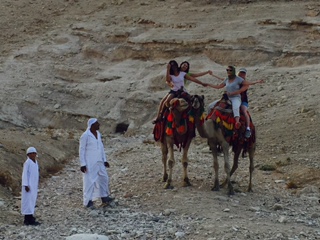 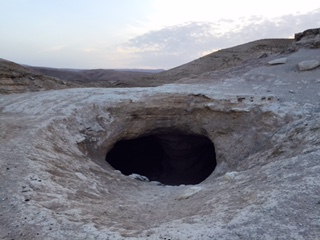 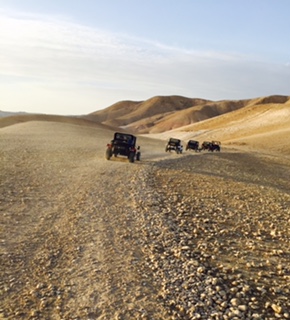