The idea of going to Oman came about largely as a result of a need to be uncomfortable. Each year we hold an overseas meeting and, more often than not, we put our overseas meeting in comfortable areas of Europe. But a friend of mine had told me that Oman was this extraordinary place. So, I did some research, worked with the government’s tourist authority, got an incredible deal, and decided that we would have our overseas meeting in a place we had never been to before. What a great decision. 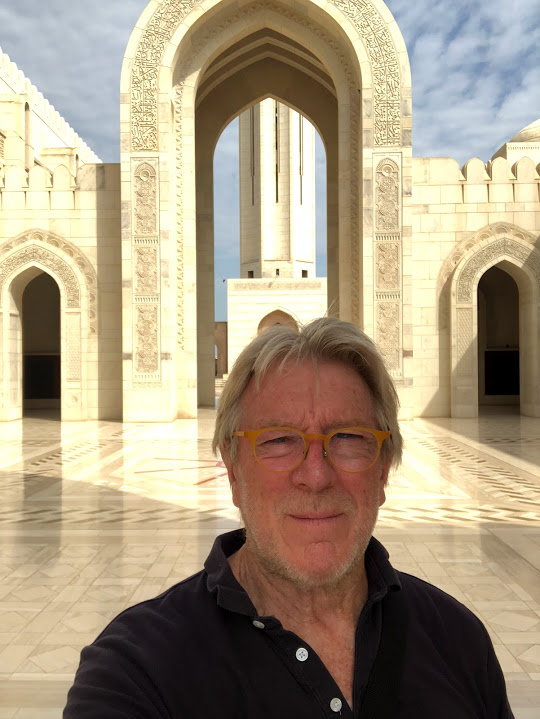 Oman is more complicated to get to than most places. But because of the exceptional service from Boston on Qatar to Doha or on Emirates to Dubai, you can do a lot on non-stop flights. From London, Muscat (the capital of Oman) is well-served by both Oman Airways and British Airways.

For the journey out, I chose to travel on British Airways on my favorite day flight from Boston. I spent one night in London and the following day flew on the overnight, non-stop flight from London to Muscat. Along the way, I picked up a few of our London staff and off we went on a journey unknown. Seven hours later we arrived in Muscat. Three time zones beyond London and eight time zones beyond Boston. While this was not my first time in the Middle East – I’ve been to Israel and Jordan – this was my first time so far east.

Oman requires you to get a visa for tourism travel which is relatively easy to get online. The process of entry was just about as smooth as any entry to any country I have ever been to. If you have ever tried to fly into Israel, you’ll know the interrogation you sometimes get at Israeli Immigration. Oman was polite, friendly, civilized, and more importantly, the toilets were fabulous in the arrival zone! First impressions are usually the toilets in any country that you arrive in. Oman was in the Real Madrid category of toilets! 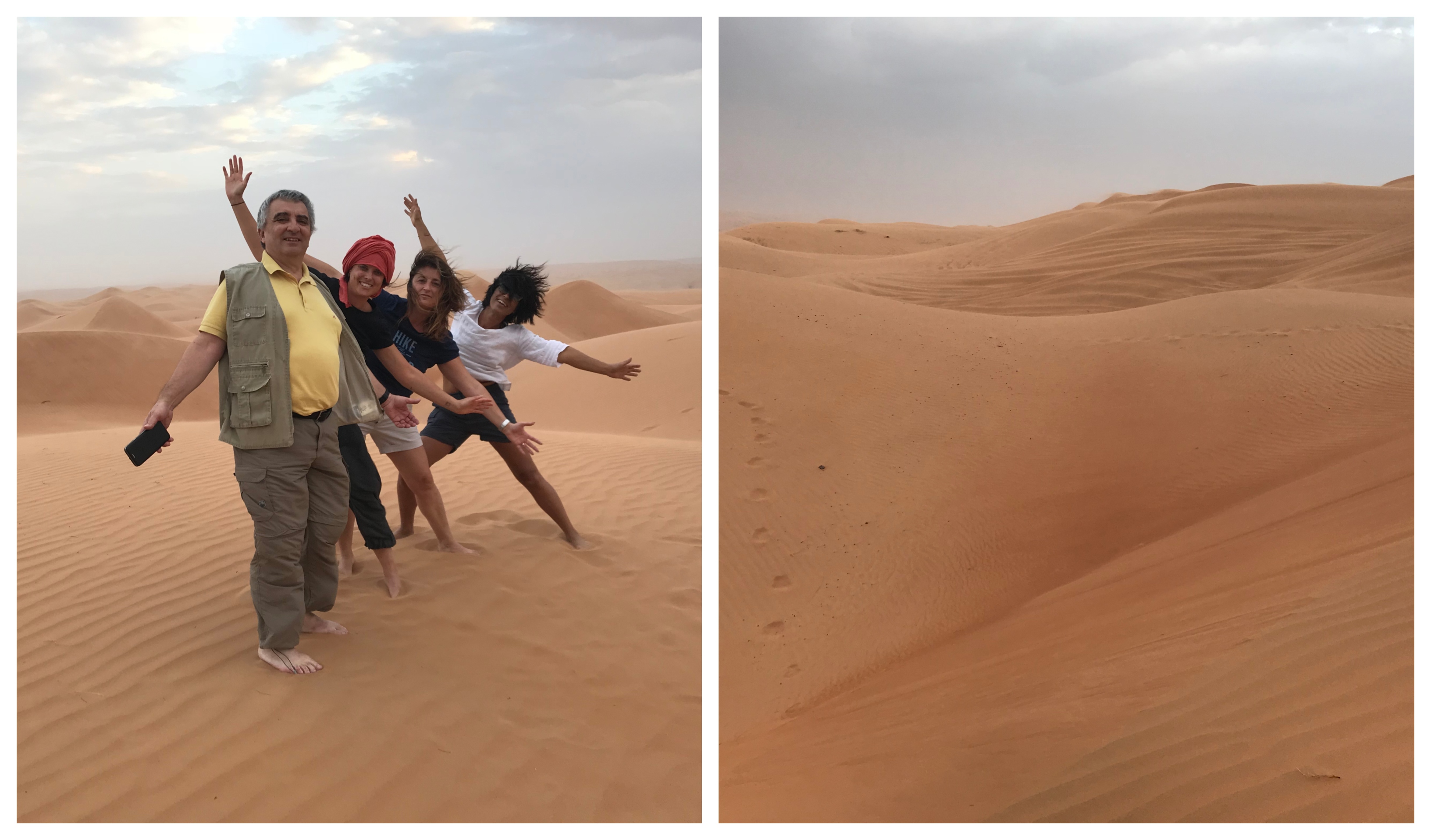 Oman is an incredibly diverse country with a coastline of nearly 2,000 miles and an interior desert that is the sort of desert you only dream – imagine sweeping vistas of sand dunes constantly changing. Oman has mountains (and lots of them) with some of them as high as 10,000 feet. The canyons there are just as impressive as the Grand Canyon. 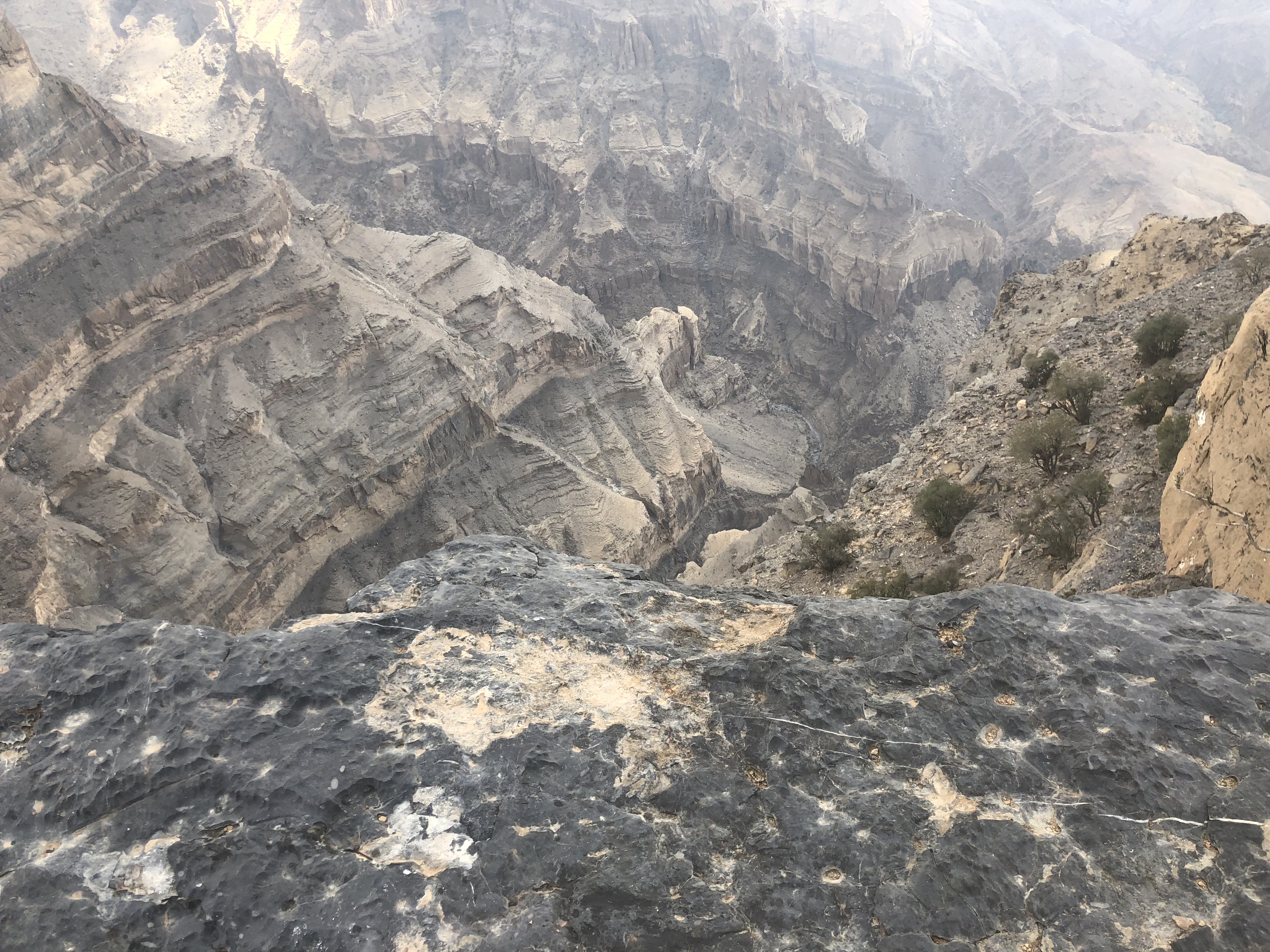 Oman has plenty of wadis – shallow, usually sharply defined, depressions in a desert region that are often dry except for the rainy season. These then form into a stunning oasis. 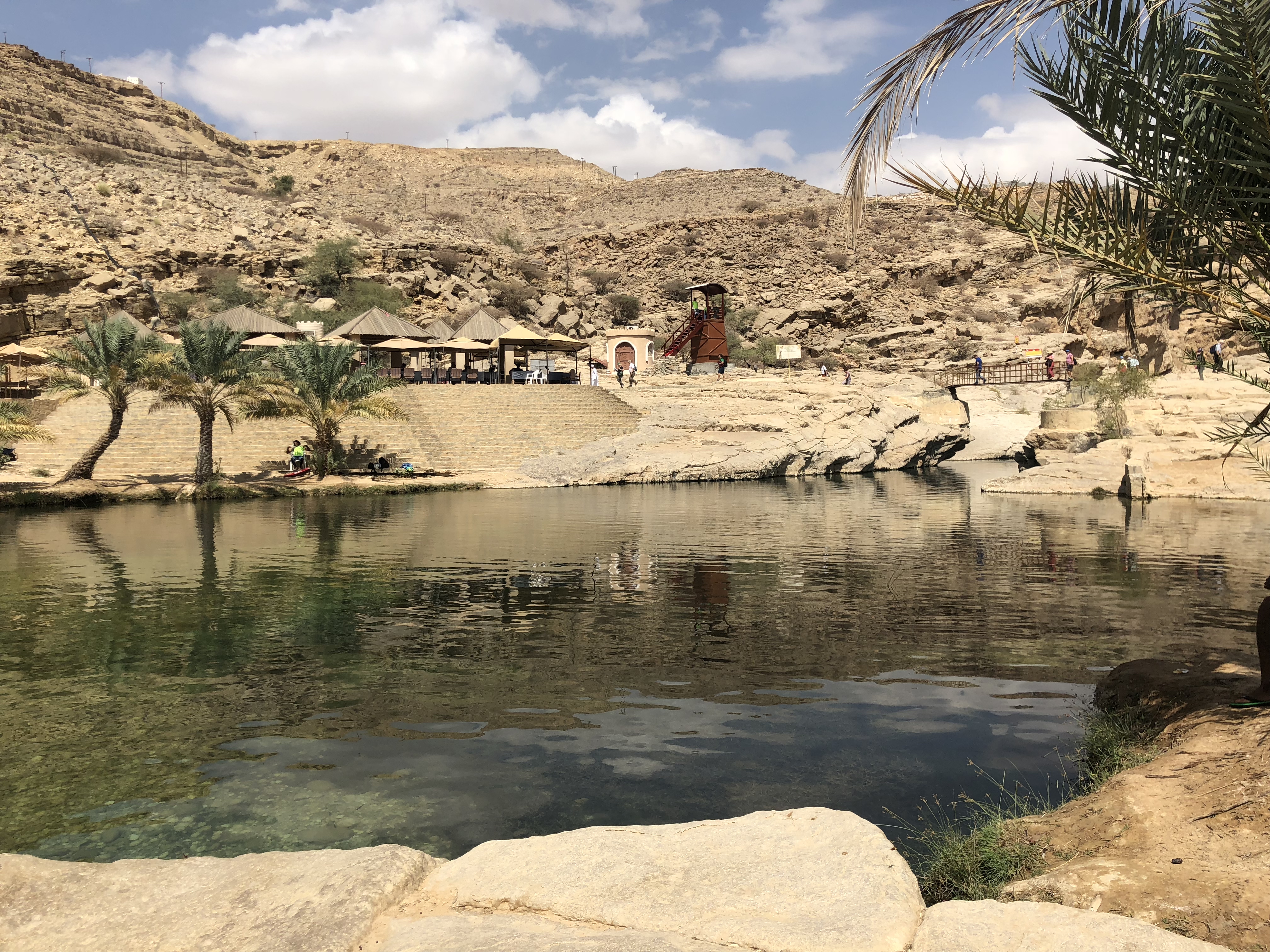 Oman has sinkholes and there are limestone crevices where you can swim close to, but yet remotely, from the ocean. In fact, the ocean there is amazing with some of the most beautiful coral reefs in the world and beautiful, white sand beaches with turtles and dolphins.

Oman has fjords in the stunning northeast around the Straits of Hormuz. It is frequently called the Norway of Arabia. Not to mention that Oman also has castles, hot springs, forts, and is the largest producer of dates in the world. Oman has everything. 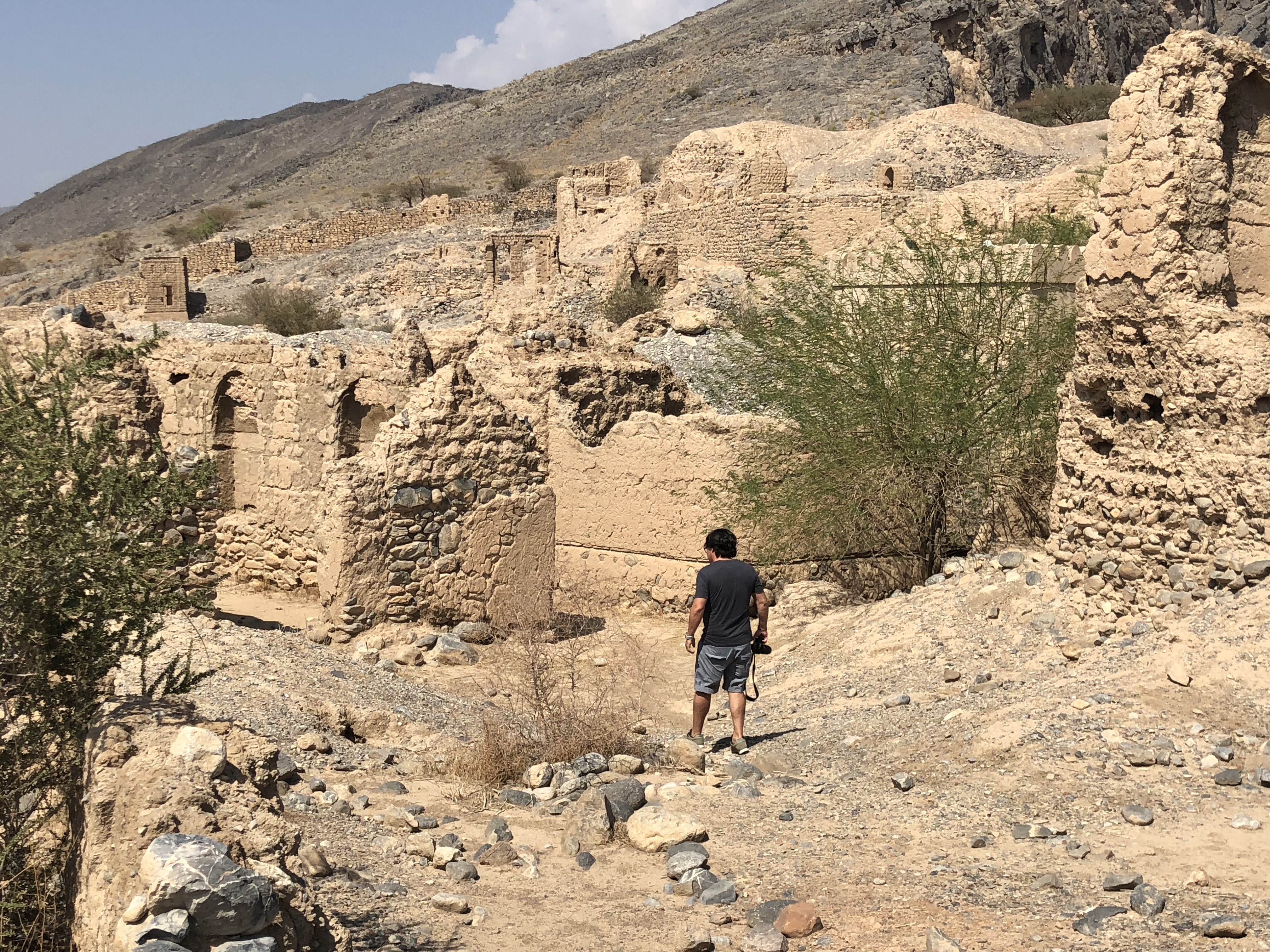 Its indigenous population represents about 50% of the five million people that call Oman home. The other 50% are immigrants, most of whom are from India and the Philippines, who work and build businesses in Oman but can never become citizens of Oman. The country has a high level of education, and both education and healthcare are free for everyone. The infrastructure in Oman (roads, sewage, bridges, electricity) is higher than that of most European countries. In addition, it has one of the highest salination projects in the world.

Oman is truly a jewel stuck between Yemen, Saudi Arabia, and the United Arab Emirates. Yemen is really on nobody’s bucket list and Saudi Arabia is impenetrable for most of the world…thankfully! The Emirates is a well-traveled route with an overdeveloped strip of seven emirates most famous for Abu Dhabi, the Grand Mosque, and Dubai with its ultra-modern Burj Khalifa Tower, shopping malls, and extravagant entertainment options. Oman is simply different. It is practically impossible to cover all of it in one journey. 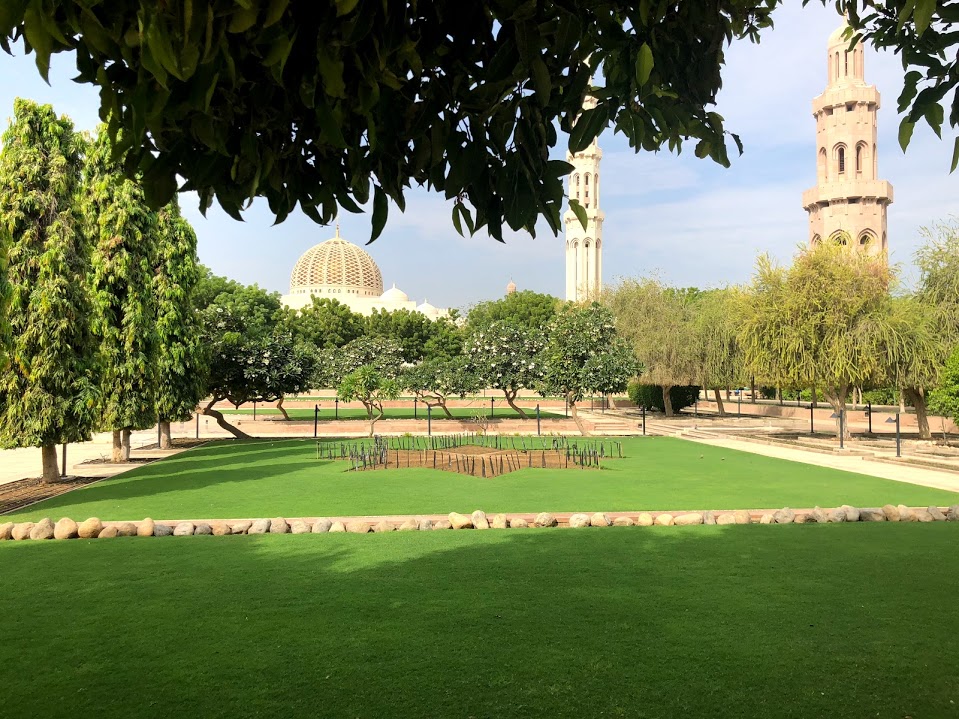 The capital, Muscat, is relatively modern and sits with the backdrop of the Al Hajar Mountains dominating the landscape. However, the city is not very memorable because everything is so modern – even the mosques and the Al Alam Palace. But the hotels that are scattered along the beaches are phenomenal and the hospitality is incredible. Alcohol in Oman is often not available in restaurants but is always available in hotels and hotel bars. The souks, the traditional marketplaces, are more interesting in the ancient city of Nizwa, Oman’s cultural capital. Here you can buy pretty much anything you want. 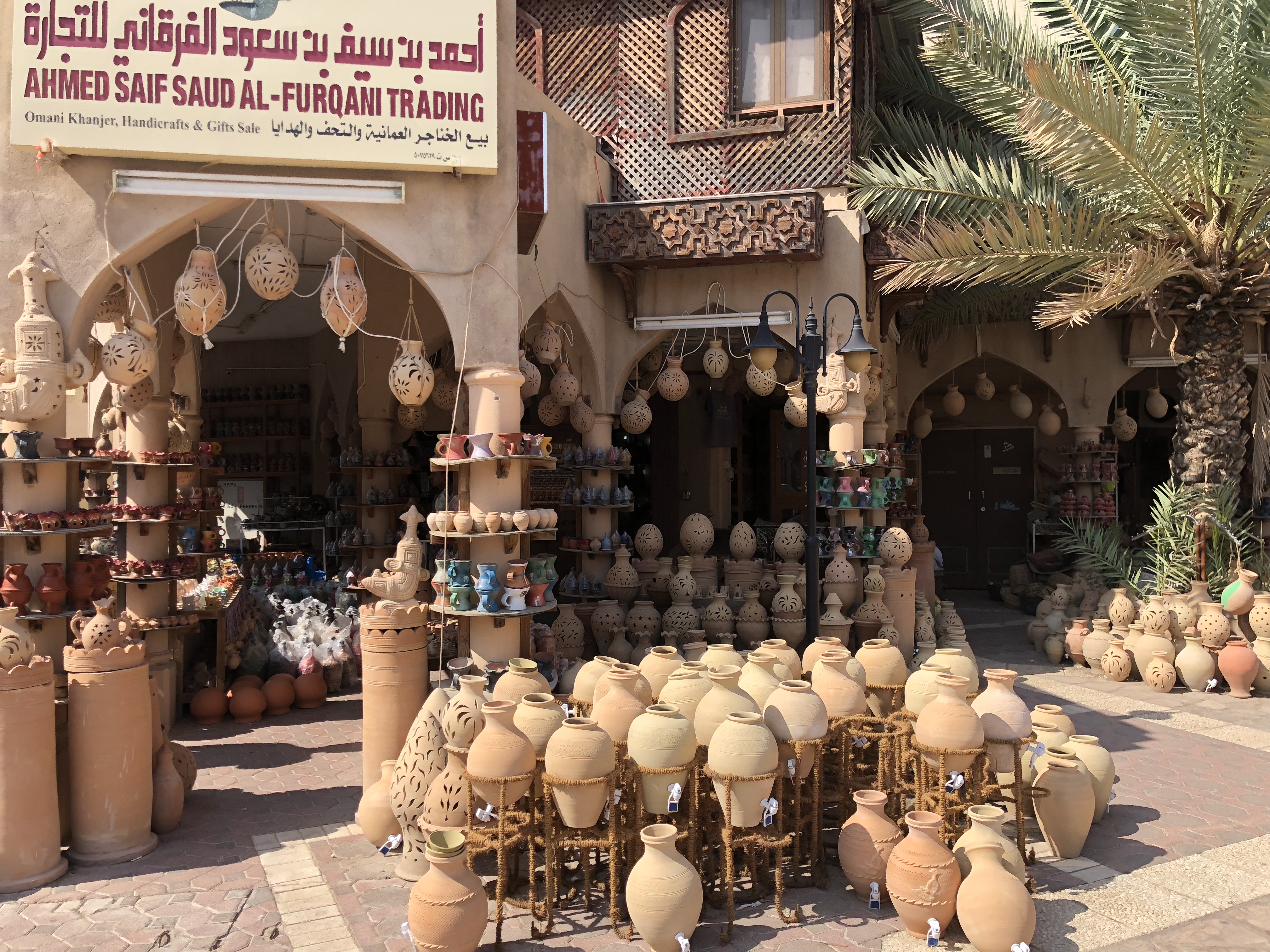 For me, the highlights of Oman were the diversity, the warmth of the people, and those sheer travel moments when you simply cannot believe what you are seeing.

The Desert Camp and the Fjords

The drive from Muscat to the Wahiba Sands and the Desert Camp took us along highways with sand on either side and free roaming camels. 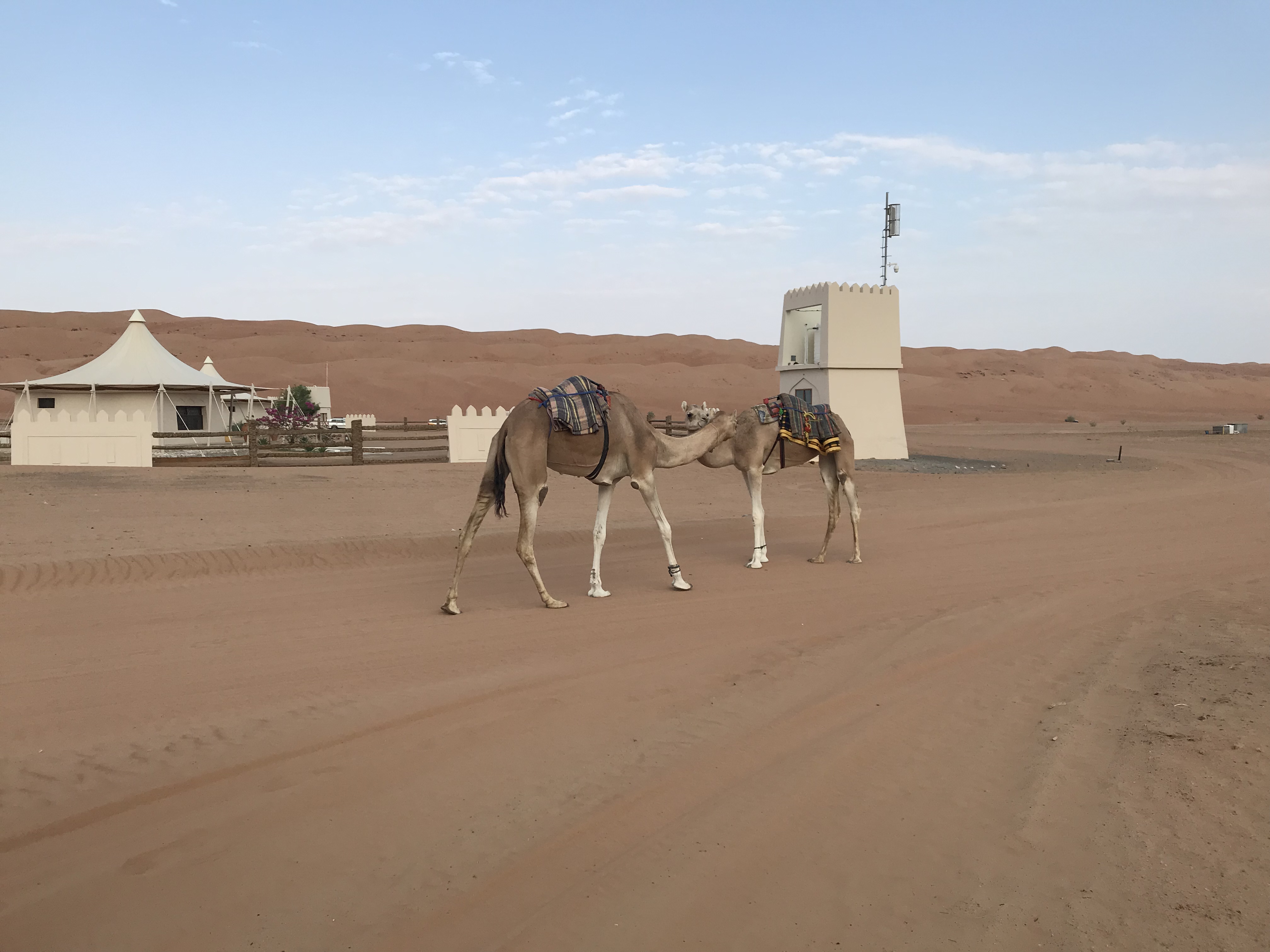 The dunes, the undulating sands, and the wandering camels, were some of the most extraordinary sights I have ever encountered in travel. Watching the sunset from the top of the dunes and then the next morning climbing to watch the sun rise was one of the greatest travel moments I have ever had. The sands had an almost pink tint to them and constantly changed contour and shape with the wind and the weather. 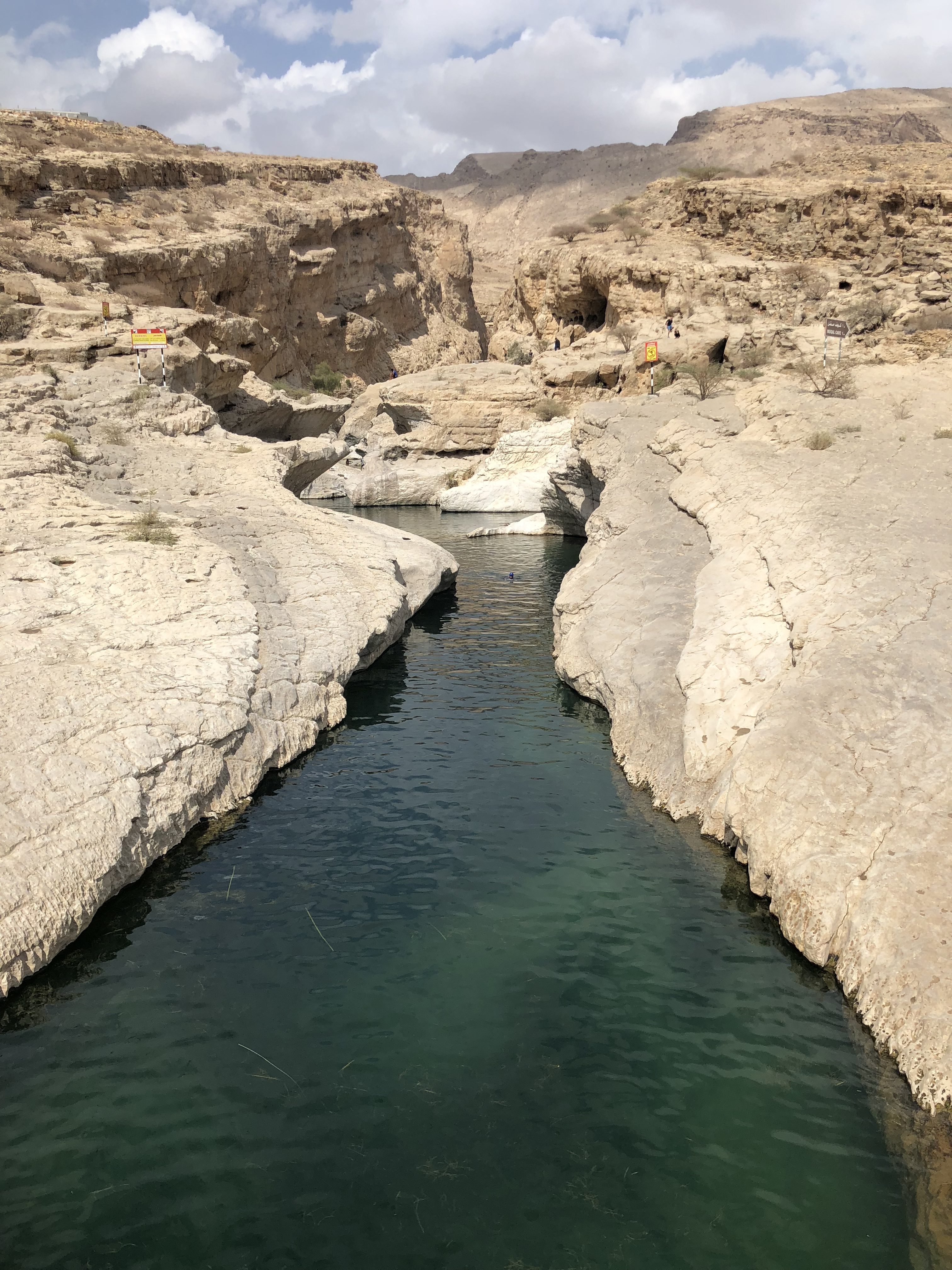 The Wadi Shab took us on an incredible journey through a breathtaking mountain ravine where we swam in fresh water surrounded by sandstone walls of rock amidst date and banana plantations and waterfalls. In Jabal Akhdar, the breathtaking panorama and rugged mountains were extraordinary. Taking the hydrofoil from the Port of Sohar to Khasab in the Strait of Hormuz, with Iran flickering in the distant horizon, was amazing. Arriving in the tiny town of Kumzar, it felt like we had awoken a sleepy village. The trip on the dhow boat through the fjords and snorkeling with dolphins was like no other island cruise I have taken. The hotels in this area were magnificent and were not expensive. 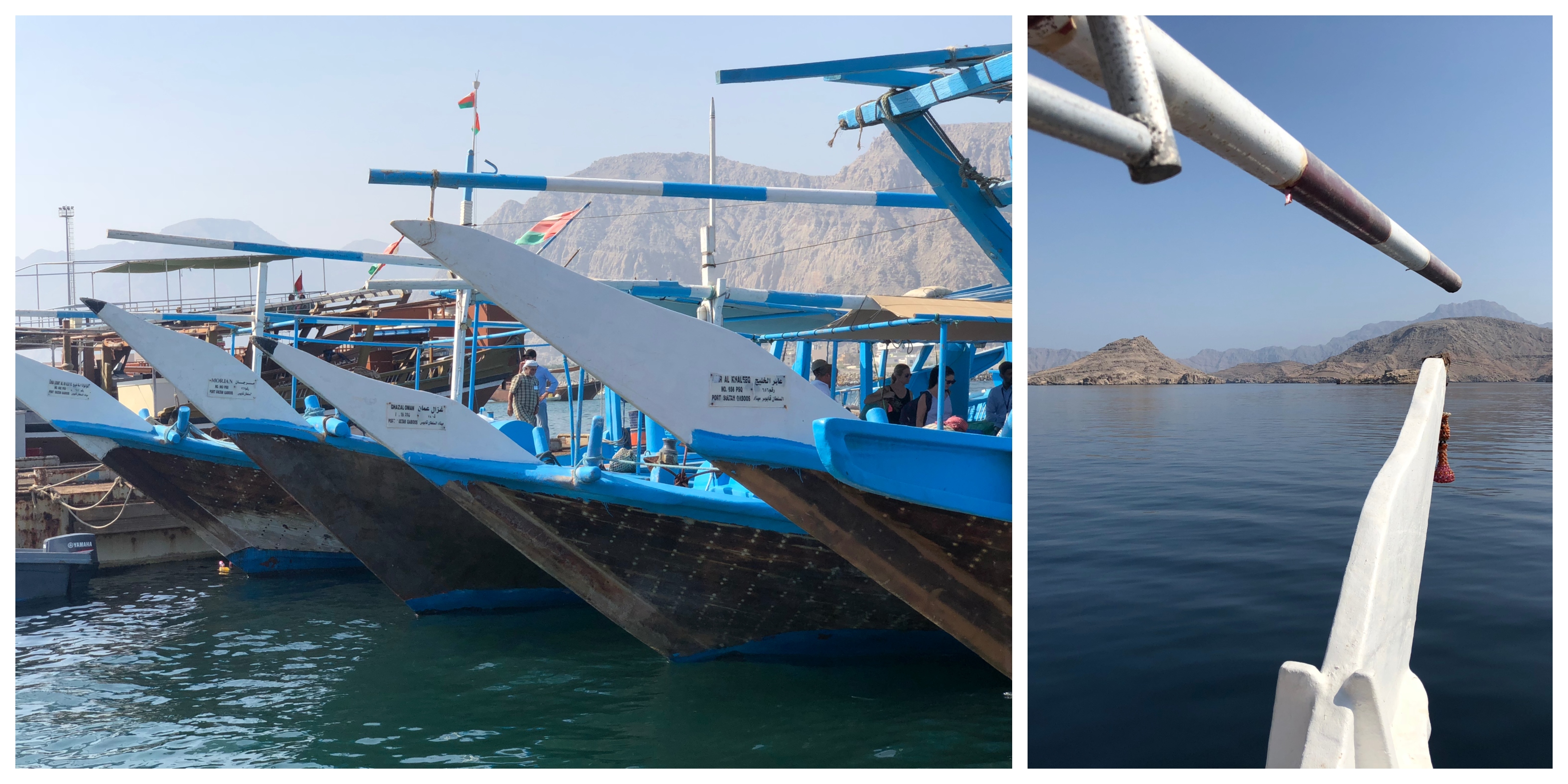 The End of the Journey

We then traveled from Oman to the UAE. The journey from Khasab to Dubai took only two hours in a car. It felt strange to arrive in Dubai, a glitzy, overbuilt, sky scraper-jammed panorama, with a souk that was pushy and irritating. 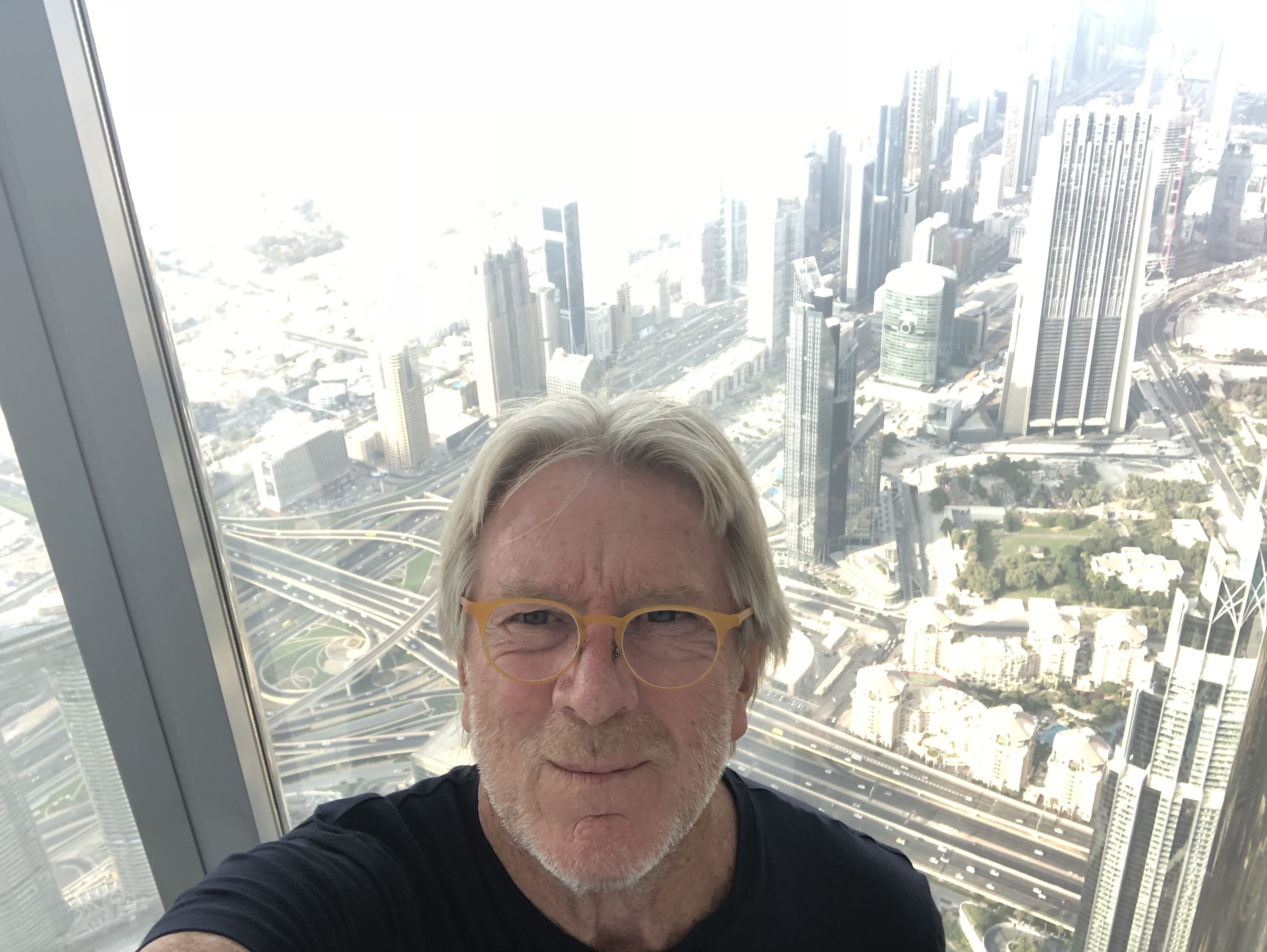 Honestly, I couldn’t wait to leave and head to the shopping mall and go skiing. Indeed, that is what I did! Two hours of skiing at Ski Dubai, located in a shopping mall, for $45 was one of the great moments of my life. 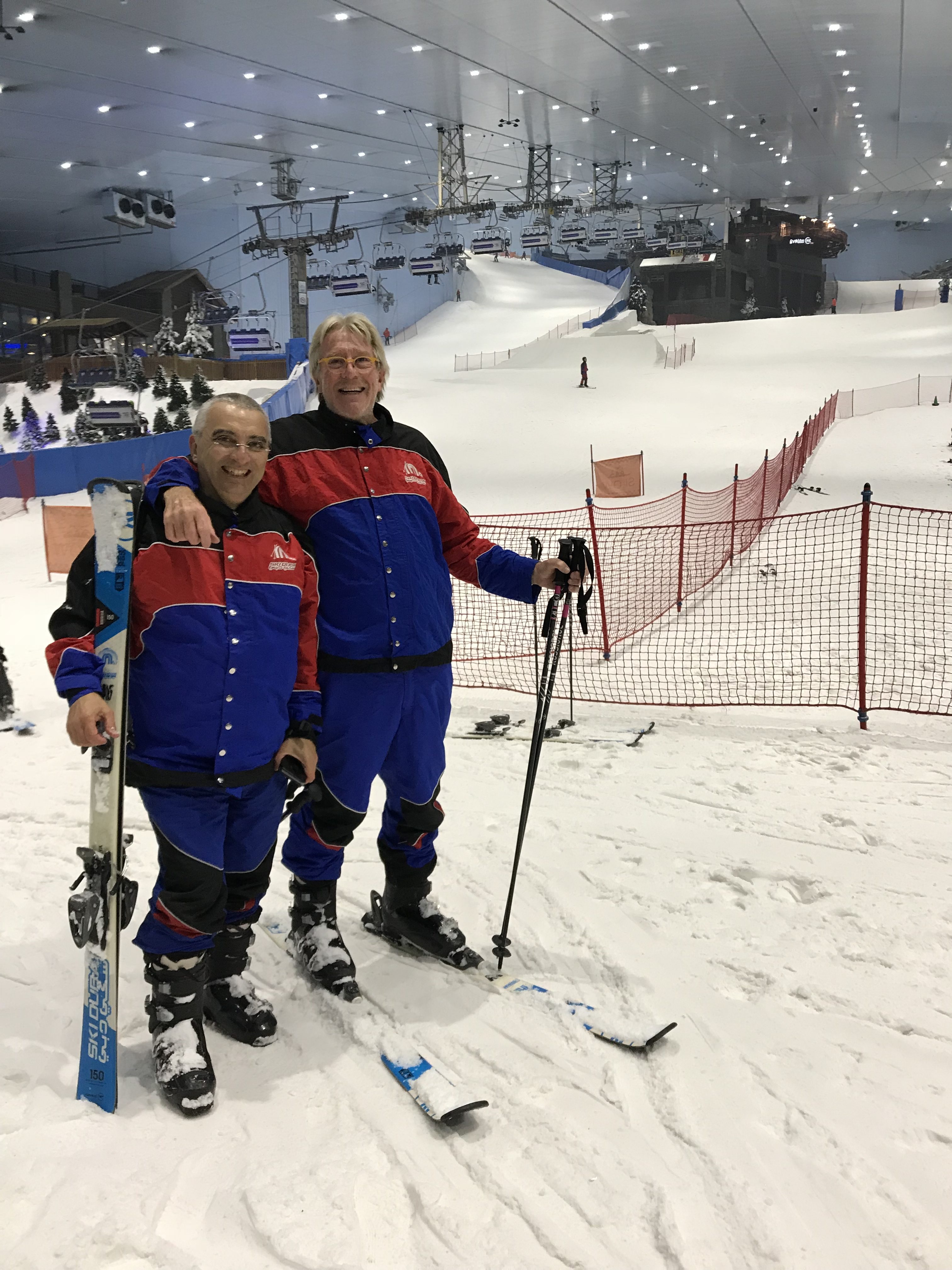 The next day, I took the 8:00 am non-stop flight on Emirates back to Boston in time to go to game two of the World Series and watch our victorious Red Sox begin their march to the championship. What a trip that was and what a country Oman is. I could not recommend it enough.

Does size matter? according to Emirates airlines, it sure does. They have staked their airline on the A380 Airbus. A larger than life plane with a seating capacity of 460. Its wing span is 54% larger than a Boeing 747 and yet it is super efficient. With 320 miles of wiring inside the plane, it is also super state of the art technology. Add to that a comfort cabin that boasts in first class a shower and discreet sleeping and you get the picture.

So, why are BA and most other airlines not buying the Airbus and why is the A380 not realizing its early potential? Because BA sees the future in the Dreamliner 787. A smaller and more cost effective plane with 214 seating capacity and the ability to travel long distances and land in smaller hub cities. Add to that a fleet of 777 and you can see that nobody at BA is craving the move for a monster plane.

Emirates is dreaming that Dubai will become the new world hub of all routes to Australia and the far East. But from the USA, nobody is going that way, and from Europe, the traffic to Dubai may not be able to sustain a full plane of business travelers on such a grandiose scale. Did Emirates gamble wrong? Maybe. But as Emirates is wholly owned by the government of Dubai, I am sure that at least for the time being, the money is not going to run out. And at least they haven’t been so foolish and made a bid to bail out Alitalia which is still shopping itself around. Etihad didn’t take the bait. Oh well.