So, the English made it all the way to the final of the Euro championships and then…heartbreak…again. How strange sports combat is. Almost unwatchable at the end. This gladiatorial battle spent over 2 hours of tactical maneuvering with two breaks in between and it came down to 12 yards. The distance between a penalty spot and the goal. And there it was. 60,000 fanatical fans, all cheering England on against the enemy Italians. A penalty shoot out. 12 yards. A towering goalkeeper in the Italian net who was 6ft 7, moving along the goal line intimidating the penalty shooters. It all came down to the this. 32 teams, all reduced to two teams on an English summer night, and certainty that one team would win and one would lose. The penalty shoot out. As glorious an event as sports can provide. A shooter, a goalkeeper and a referee with a whistle. And the sounds of the masses resonating around the stadium and anguish and nerves and breathtaking tension filling the evening air. Inevitably England’s long torturous journey from the distant 1966 England victory against the dreaded Germans, would come back to Wembley for redemption. This time. The team was better. The Italians weaker. The English scored after 2 minutes. England would be assured of victory and an end to the curse that showed no mercy for 55 years! Ignominy against Iceland, heartache against Spain. Prince William, Boris Johnston, David Beckham all there to celebrate the victory that was assured. The Queen sending a message of good luck. The Queen. Even she had become interested! She likes horse racing and ascot and maybe rugby but not this sport of the common man. Surely, we were assured now! This was England. The cup was coming home. Brexit was worth it, we didn’t need those dastardly Europeans. We had survived Covid. We would walk once more with dignity down Wembley Way as champions, if not of the world, of Europe. Teach those Europeans a thing or two about decency.

And then. It happened. The equalizer.

And then the penalty shoot out. Last minute substitutions were made to put our best foot forward. But the goalkeeper had a reach unimaginably long. The guy was from Naples. How did they breed them so tall there! And in one second, the hopes and dreams of a nation were gone. 55 years would no longer be the number of lost opportunities. We had lost the moment. Just at the very end. 12 yards. Indecision. Nerves. And suddenly it was gone. Rome celebrated. The Italians were the winners. 12 yards. Fans barely able to watch. Torment, tears, a long journey home on the Underground.

The World Cup will come around shortly and we will try once more but never will that cup feel so close as it did on that fateful evening at Wembley. 12 yards. 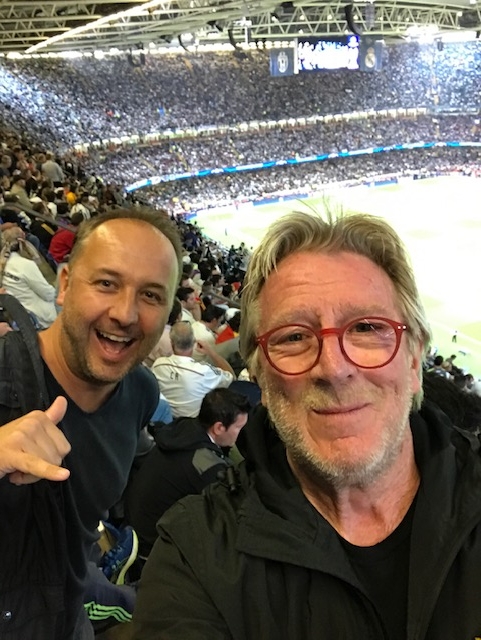 It’s a strange place to go for a football game.  When I think of Wales, I always think of rugby, but this was the Champion’s League Final; the most important soccer game of the year. For some ungodly reason, the match was held in the Welsh capital of Cardiff. Presumably because someone paid a lot of money to someone else for the privilege.

Confession #1 is that I had never been to Cardiff before and was ready and waiting to discover a part of the British Isles that I was unfamiliar with. Confession #2, Wales had never really been on my wish list. Still, only a two-hour intercity train from London’s Paddington Station and voila…you’re in Wales or Cymru. What I know about Wales is that its famous for its castles, its rugged interior, and the mountain range known as Snowdonia. Add to that a strong Celtic tradition, a bizarre language, and a history of coal and it’s all a bit of a hodgepodge!

The Sandringham Hotel, our base for the weekend, which was a bit of a scramble because of the Champion’s League Final, was a perfectly centrally located hotel, albeit a little basic. It was a short walk from the station to the hotel and delight upon delight we found that the hotel had another side to its personality. This was no ordinary bog standard hotel. It had a ground floor jazz club that stayed open until 3 o’clock in the morning. Things were looking up.

We were right on St. Mary’s Street, the main drag of Cardiff, where I imagine there are more pubs in the one quarter mile than most cities in the world. For a Champion’s League soccer match or a rugby match, you could say that this was pretty optimal. In addition to that, places seemed to stay open late. Still, we had a lot more to see than just pubs. We had to visit the famed castle and the Central Market which was just off St. Mary’s Street – in fact everything seemed just off St. Mary’s Street! 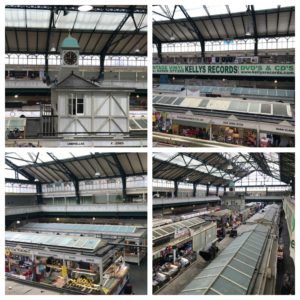 As it turns out, Heineken had taken over the Cardiff Castle so all we got was the view of the outside. The Dutch had invaded Wales! As for the marketplace, it had a glass atrium, an upper level, and a very Victorian feel to it, but most of the shops had decided to close, presumably because there was a spare 60,000 people in town who wanted to buy something. These guys really knew how to make money! No problem, we wandered around, found a tea shop, and had some Welsh rarebit or Welsh rabbit depending on who you asked (it’s basically just cheese on toast with a lot of brown sauce on top of it).

We went to the game which was truly fabulous and the stadium was remarkable. I believe it was almost twice the size of the town! In the end, Real Madrid won the game and we got to eat at the Charleston’s Steakhouse which is the only place in the world I had ever been, apart from McDonalds, where you must pay for your meal before they serve you. Their secret recipe? They stay open until 4 o’clock in the morning and they were doing a lot of business. 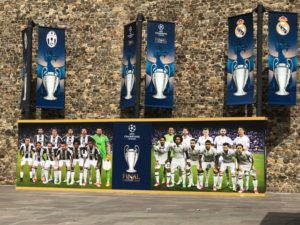 So, Cardiff – a lively city? Yes. A great stadium for soccer and rugby games? Absolutely one of the best in the world. A lot of things to do there? Absolutely not. The pubs stayed open late and no wonder since there isn’t much to do here besides drink, eat Welsh rarebit or rabbit, and have a steak at 4:00 AM. It’s a place I can wait to return to.

Now I know that it’s been a tough few weeks for football.  FIFA is embroiled in a scandal fit for cable television – turns out every single World Cup for the last God knows how many years, was bought. No really? It surprised me that the micro bodies that run the regional competitions like UEFA aren’t joining in the corruption. But you have absolutely nothing to do with any of that corruption stuff – so thank goodness I come to you with an idea to make money – lest you too go down the path of no return.

Every year I attend the Champions League Final and every year I ask myself how anybody could conceive of something so pitiful as the Champions League Village, a place where devout fans hang out (usually in the boiling sun) looking for something to do or buy and usually coming up empty-handed? I actually did want to buy a souvenir shirt and I was prepared to pay $50 for it. It’s what I call noblesse oblige marketing – holier than thou branding. The players make millions and millions, the people pay silly money to watch this amazing game – and yet they take us for granted. We’re greeted by cops with guns. We’re not allowed to drink alcohol in the stadium. There is no food in the stadium. God forbid your team wins and you stay to watch the ceremony which lasts for an hour and a half.  Then you are definitely in bad shape because by the time you get back into town, you guessed it – the crowds are everywhere and all the restaurants have closed.

So here’s my thing. Football is the fastest growing sport – more money moves and changes hands in this sport than in any other sport in the world. The governing body of the world sport, FIFA seems to orient itself around the religion of money and bribes, and yet I can’t buy a bloody hat or t-shirt in your showcase village that only takes place once a year? The Champions League Village is supposed to be a showcase for UEFA – the grand finale of European soccer. The two best clubs (basically in the world) compete at this event. And here I am wandering under the gate into the Champions Village, planning my souvenir shopping list, only to find that the t-shirt shop had sold out of t-shirts by mid-day. No t-shirts. No merchandise. Practically no food at all. If you’re a VIP member of UEFA, I imagine you get your prawn sandwich and your glass of champagne and a free t-shirt.

So is it that there’s just not enough money in selling a t-shirt? You only deal in the 100s of millions? Or is it just at the merchandising level, when it comes to this match that only happens once a year, you guys go to sleep? We are desperate to spend money, but you don’t take mastercard..oops, they are a sponsor! And we truly want to buy something with the name of the event and the teams: bags, hats, shirts, wristbands, etc… By my estimate there are about 50,000 fans who probably want to spend around $5M in merchandising and food. Now I know that $5M is not a lot. Especially when FIFA hands out $10M checks willy-nilly to regional confederations. But this is a Premier event and you guys are better than FIFA. In the end it was a smart enterprising guy outside the village that was hawking illegal shirts for 20 Euros that got my money!

So hey, Michel Platini, how about a thought for the people who pay your wages, spent a fortune on a ticket, and truly think, even in the most cynical moment, that this is a beautiful game? Throw us a bone! UEFA, get your act together! While you guys are all sipping champagne at your pre-event parties and eating fancy hors d’oeuvres and chatting “real football,” maybe you could give some consideration to the normal guys – aka money-paying fans. Ah, the life of a working class football fanatic.