Early in the day on Monday, April 15th, I had been visiting groups and snapping pictures around Notre Dame. It was a lovely day and the cathedral was as beautiful as ever. The crowds were out in full force and the line to the cathedral entrance was as usual snaking its way across the square. Everyone was in good spirits. The air was cool but the sun was shining. It felt like spring. 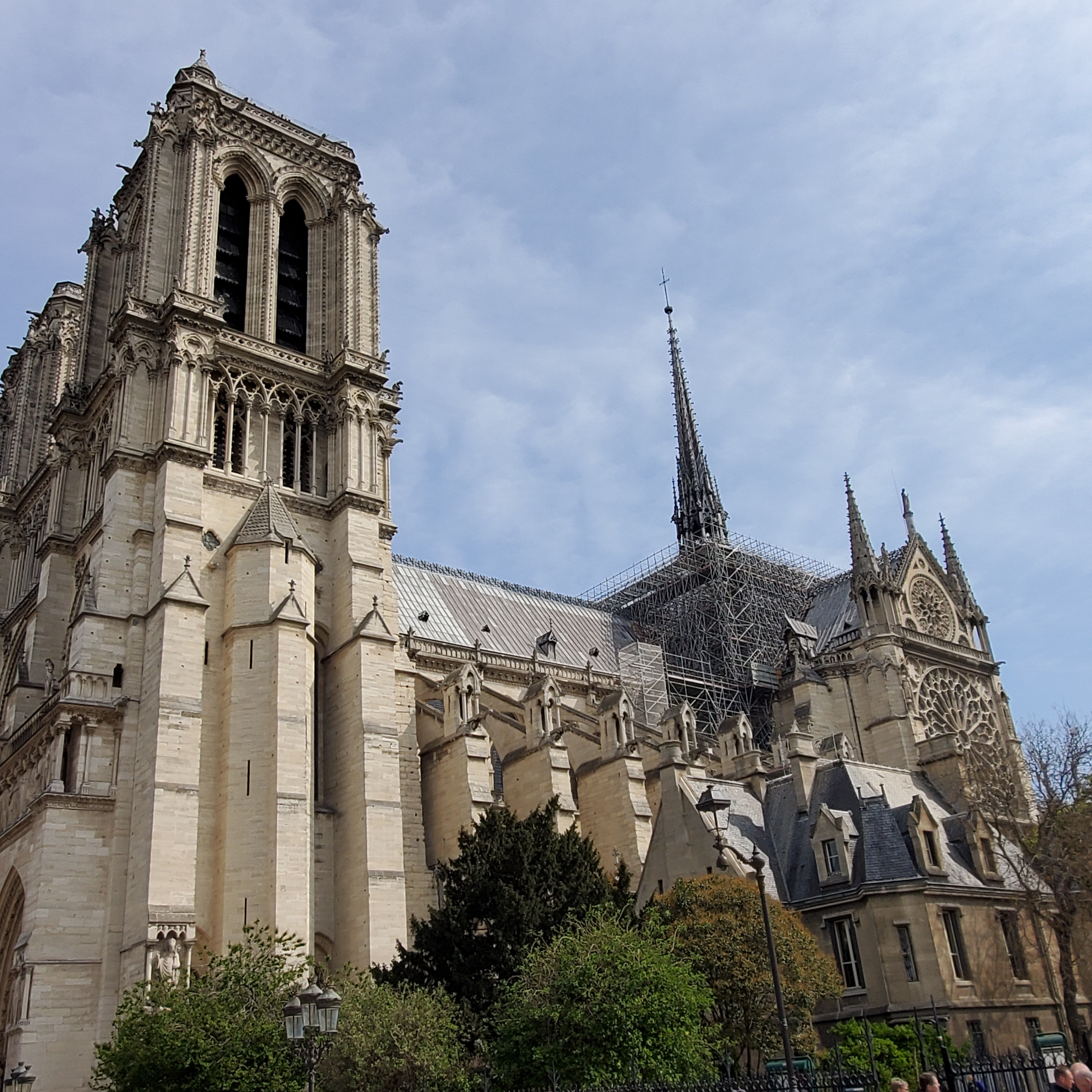 Before that, I had walked down from the Luxembourg Gardens. People were playing tennis and the spring plantings of colorful flowers was breathtaking against the backdrop of the Palace. After lunch I had grabbed an electric scooter from Lime. One of the students I was chatting with had told me what to do and I easily loaded the app onto my Phone. I sailed across town and had one of the greatest rides around Paris. I left the scooter by our office and locked it through the app. It was so cool. Paris never looked better.

That evening I was with a lovely school group who were interested in fashion. I marched them through Bon Marche to scope out all the top designer names. I’ve never taken a group through there before…and probably never will again, but it was a trip! The faces on the chic and wealthy clientele was to die for. But then we came out of the store and saw the smoke in the sky.

We were over in the left bank near St Germain which is when I got a notification on my phone. Notre Dame was on fire. At first, I thought they were speaking about the Indiana school, Notre Dame University. And then another beep on my iPhone, then the kids got them too, and suddenly social media took over and we all realized that “the” Notre Dame was really on fire and that smoke in the sky was coming from the cathedral. It was serious.

We walked to a crepe place in Montparnasse and in every bar the TVs were turned on to the news. The smoke was pouring into the evening sky. The fire was out of control. The noise of the fire trucks was everywhere. The city literally froze and was transfixed. We went up to the Montparnasse tower to get a look. It was heart wrenching. In the near distance a huge fire with flames soaring into the night sky in the center of the city. It was tragic. But with just a turn of the head, Paris was glittering and was stunning (as it always is) as I looked west towards the beautiful Eiffel Tower.

Later I grabbed a Lime scooter and headed down to the end of the Boulevard St. Michel where a huge crowd had gathered. The police had cordoned off the access point to the cathedral, but you could see the north and south towers clearly. Still the glow of a fire was evident. It was after midnight by this time as the crowd began singing a beautiful prayer. A fire truck came rolling out, the crew exhausted, and the crowd cheered. Les pompiers. They saved the north tower and risked their lives. And in all of this I realized that Paris had experienced a beautiful moment wrapped in tragedy. They had come together very humbly and sang together and were respectful. You saw the power of this old lady of Paris; 900 years and not going away.

I hung out for a while to watch. The towers were in the distance but the spire and most of the beautiful interior that I had walked around earlier was long gone. Thankfully, nobody had died, and all of our groups were safe. Soon the reconstruction will begin. The foundations and the shell of the cathedral had been preserved. The towers are still there – not sparkling white as they were in the morning sun but strong and resolute. The bateaux will pass by along the Seine as they do every day and night and we will all remember it as it was.  Notre Dame de Paris.

In the meantime, Paris will have its fair share of monuments to see. Travelers will keep on traveling and slowly we will be witness to a rebirth of this great lady of Paris.  Travel changes lives.

The territory of Alsace-Lorraine is not quite France but very much a part of it.  We were headed 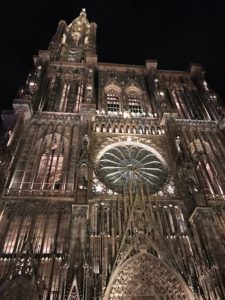 to Strasbourg, the capital of the territory, to see this beautiful city that sits on the Rhine and its tributaries.  It has fabulous wines and is the center of power for the European Parliament.  Who knows, this would potentially be for me a last look at what it was like to see a Union Jack outside the Parliament building after Brexit.

Strasbourg is foremost a beautiful town – it’s very German in feel and therefore very organized.  There are great restaurants and the pedestrian zone around the massive cathedral is worth the visit.  It has this very Euro feeling to it and houses the second largest university in France.  The constantly circulating river boats do sightseeing tours and allow you to see the beautiful old buildings adorning the river.  There is lots of sightseeing activity on the river boats and at night, a walk to the main square to see the cathedral is an absolutely spectacular stroll.  We ate in a couple of good Alsace restaurants and likely had way too much meat but greatly enjoyed the Rieslings and Pinot Blancs.  It’s one of the few times that I allow myself to indulge in sautéed foie gras. 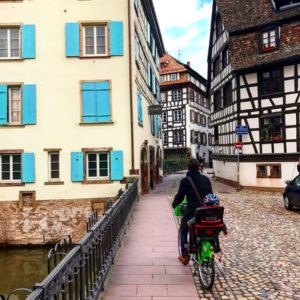 to visit two other spectacular nearby places – Baden Baden and Colmar.  For a French teacher, Colmar is a must and Baden Baden is a fabulous add-on across the border.  We even got to see a baseball game outside the EU parliament.  How strange, especially since baseball, so they say, is on the decline and soccer is on the rise.  It seems here in the heart of Europe a flicker of faith was keeping the old ball game alive.  Meanwhile, the Union Jack was flying high; a last flutter of the flag to denote that the great European experiment, alive and well everywhere, and created after the disaster of the second world war, was getting red carded in the U.K.  Go on Scotland, declare independence and leave Auntie Britain and go live with your less superior relatives, The Euros.  Ireland seems much happier living with its European neighbors since its divorce in 1922!

Take a perfectly big monument designed by engineers Maurice Koechlin, Emile Nouguier and architect Stephen Sauvestre before the patented design was bought by Gustave Eiffel, whose company than constructed the tower and imagine that there are more and more tourists that want to visit this thing because it is so perfectly placed in the middle of this beautiful city called Paris.  It has views for miles – two restaurants (58 Tour Eiffel and Le Jules Verne) and is the most visited paid monument in the world, and certainly the most recognizable. If they could charge people to look at it, they would. They can’t so they do the next most obvious thing, make everyone who’s trying to get to the top of the Eiffel Tower, truly hate the experience. Well, the French have done it.

Now you have to book reservations online with a specific time slot.  That sounds OK, no problem. Except there are hardly any time slots available! You can only book 3 months out – and at 3 months out, until zero days in, there are precisely zero time slots of available. So with no time slots available, I wonder who they’re going to. You have to resort to standing online for 2-3 hours, if you’re lucky. And this new system, if they have put in place, is called progress or avancé.  Well there is absolutely nothing avancé about this ridiculous state of affairs. If you do manage to get tickets it’s 15.5 Euros ($17) for adults, 13.5 Euros ($14.50) for ages 12 – 23, and 11Euros ($12) for ages 4-11 as well as for handicapped and those assisting them.

We’ve written to the people who run the Eiffel tower and they agree with us (which is even more frustrating and simply incredulous). Here we have yet another government agency trying to deter tourism of an iconic site that people have saved up all their lives to see. Right now all I’m looking at is a long line of kids desperate to see the world from way up on high and romance in this marvelous story of Paris, waiting and waiting and waiting. It can’t help but be anti-climactic and frustrating.  Guess what, we’ve got one in Vegas – you can’t scale it, but at this rate you can’t scale the one in Paris either. At least in Vegas, the canals of Venice are just a short walk away!  So here goes, in case you’re listening.

You’ve no idea what they are doing to your tower. I know you just built it for the World’s Fair and thought it would be torn down. And lots of people at the time said it’s horrid. But it turns out it’s become the most iconic site in the world. More than the pyramids, even. And I know you probably can’t hear this, but if there is any way you could bring sanity to the bureaucracy that prevents us from seeing your beautiful piece of art, than I would appreciate it.