When most people think of Milan, they think of the Duomo, La Scala, the Galleria Vittorio Emanuele II, and The Last Supper.

These are the “iconic” parts of Milan that are on every sightseeing tour if you happen to be passing this way.  Let’s face it; Rome compared to Milan is pretty much a non-issue.  Rome has the lot – the history, the museums, the beautiful evening light, and of course the weather.  But Milan is a city of the north; closer to its German neighbors and a stone’s throw to France.  Milan has a certain atmosphere about it.  It’s a young city, a city famous for its fashion houses and beautiful people, and a nighttime scene that can rival Spain.  Furthermore, with the advent of the high-speed train network, notably the Frecciarossa, Milan to Rome is a cool 3.5 hours.  Two cities that were so diametrically opposed have been brought closer together through modern transportation. And who would have thought that Milan has a touch of Venice to it as well!

Milan boasts a neighborhood of canals that had been forgotten about and then resurrected to create a vibrant restaurant and bar scene that for most people is one of the best kept secrets in Europe.

The Navigli is situated southwest of the historic center.  In its heyday, the canals formed a 150 km network that connected the city with the main rivers and the large lakes to the north.  They were used for irrigation and more importantly transportation.  The earliest known construction was in the 12th century.  Because of this ingenious way to transport goods and irrigate farm lands, Milan became the country’s largest inland port despite the absence of a main river.  This “little Venice” thrived but then with the advent of roads, it fell into decline.  What consisted of five canals has now been reduced down to three.  But a renaissance of sorts took place around the main canal, the Naviglio Grande.  It is a trendy locale with high house prices but it is a cool urban neighborhood that represents an edgy Milan.  This is really where everything happens with cruise boats, restaurants, bars, and a fabulous antique market.  I got to eat in one of the great restaurants called Fiaschetteria Il Montalcino on the Via Valenza #17.  We took a couple of beers in one of the bars, walked over a beautiful iron bridge, and gazed in wonder at the shimmering lights on an ancient canal.  I could not believe this was my first time here.  I could not believe this was Milan.  Travel is a wonder. 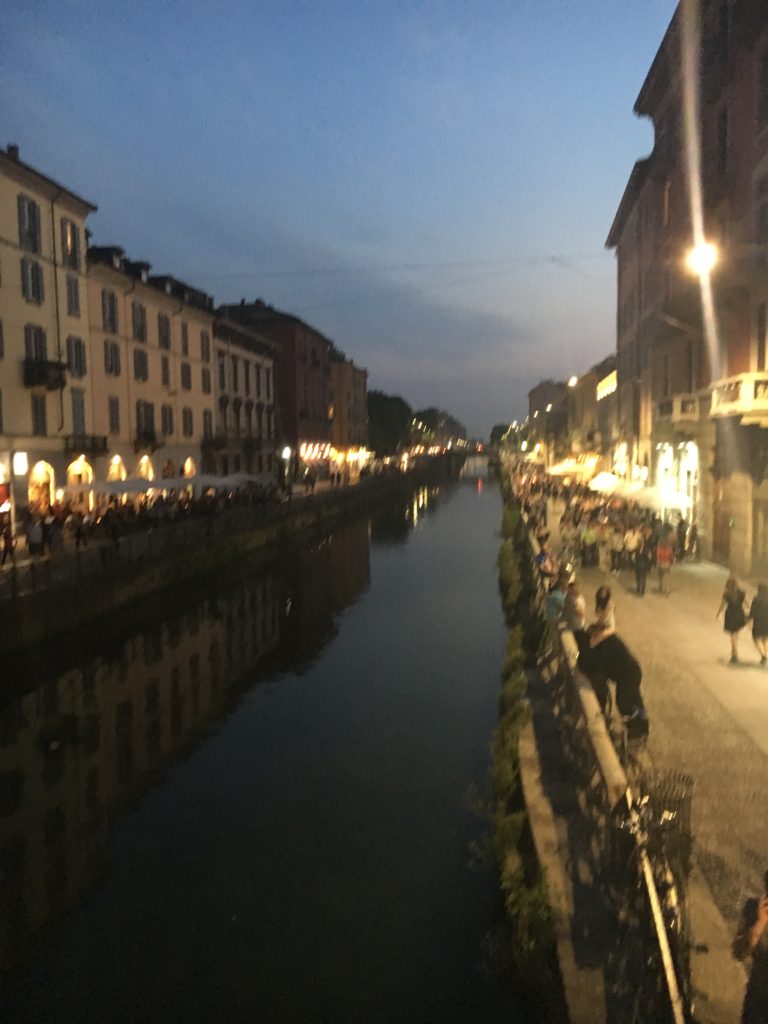