Corfu is an island well known by ferry travelers enroute to Athens. In the summer, ferries push straight on from Brindisi in Italy to Athens but off peak, Corfu is a stopover. It has one off the most charming towns in all of Greece. Corfu Town. The influence of Venetians is everywhere. Four centuries of influence. A castle and beautiful pastel-colored buildings with medieval cobbled marbled streets that house the usual souvenir stuff that I confess I’m attracted to! There is a cool bar and restaurant scene, lots of nighttime activity and several narrow passageways that offer mystery tours through the old town. It is probably the most beautiful town of the Greek Islands. Small enough to boast and show off its history and lively enough not to dampen the vacation spirits. And if course, in every plaza there is ample time to catch up on Greek salad, grilled octopus and moussaka. Whatever your fancy.

I had not been back for a long time. It was nice to get back into the travel groove again. Especially if you have been watching the gorgeously told TV series on the Durrell’s who lived on the island during the 1930’s before the start of the Second World War.

How to get there….I traveled from Rome to Corfu on Ryan Air. BA flies daily from London. There are several flights from Athens each day. Hotel Cavaliers Hotel is right in center of town and convenient to everything. 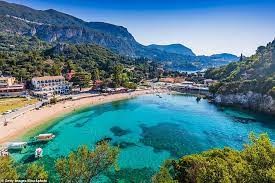