We drove out of Rome past the Protestant Cemetery and stopped to take a look at Eataly.

This is the biggest location worldwide of the chain and it is in a very cool building.

The building itself was constructed with public funds and opened in 1989 as the air terminal to handle the traffic from the 1990 World Cup.  It was designed by the Spanish architect, Julio Lafuente, and is a very retro building that easily could have been designed in 1960’s.  From the beginning, nobody could find taxis (in those days it was in the middle of nowhere) and it was not easy to cart luggage from the nearby Ostiense train station across to the air terminal.  Ultimately it was abandoned and remained empty for years until it was purchased for not a lot by the financiers of Eataly.  What luck that Eataly picked up on this slightly dilapidated post-modern structure!

I had been to the Eataly in Turin before but this one is huge and feels more like making a trip to an American mall than being in Rome.

For me, I would rather do my shopping in the Campo di Fiore but I shouldn’t knock it – Eataly is coming to Boston and opening in the next few weeks.  Just imagine, wheels of parmesan, hocks of prosciutto, pasta from every region, restaurants and shops galore, and all within walking distance of my house!  I’ll take that any day. 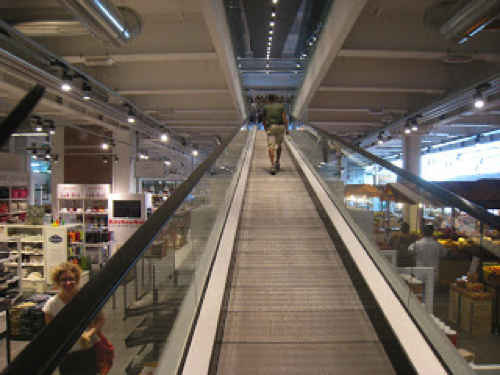