When you travel anywhere in January, especially in Europe, there is a good chance if you are an American and love American football, there is a major game going on.  As it happened, I was in Barcelona when the Patriots were playing Kansas City so of course my first inquiry on my smart phone was to find an Irish bar.

Irish bars are these remarkable institutions found in every city in the world from Shanghai to Istanbul.  The Irish understand the needs of the modern sports fanatic.  Yes, they sell you Guinness and Harp along with local brews and average food, but the thing they do the best is stay open late so that we can all watch an American football game long after the other bars in the neighborhood have closed.  Irish Bars and American Football simply go hand in hand. My favorite bar in Rome is Scholar’s Lounge and it is ironically next to Berlusconi’s house. I guess he doesn’t mind the commotion with all the parties he hosts!

Irish bars are good for soccer in the afternoon, and American football or baseball into the late evening and early morning. Plus they rock.  They understand that one television screen is not enough – they have 10, maybe more – and everybody gathers there.  I often thing that some people never leave the bars.  In Barcelona, I’m not sure when the bar even closed.  It’s a late city and the Irish bars can outlast any city ordinance for closing.  It must be because my grandmother is Irish that I feel right at home drinking Guinness and watching an American football game in a beautiful city. 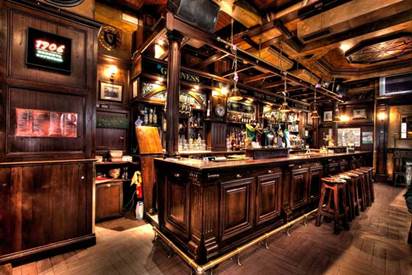