A Tale of Two Toilets

It was the best of times, it was the worst of times. A journey across the Alps often began in medieval times  at the ancient crossroads of the Castle of Chillon; beautifully situated on the Northern Shores of Lake Leman, it is a stunning sight engulfed by snowcapped mountains. This fortress was rarely breached, and inside the fort to this day, there are fantastic remnants of original furnishings, art work and tapestries.

The most interesting thing of all, are the ancient latrines – jutting out over the lake, some forty feet higher than the lake itself, the auto flush was better than your state-of-the-art septic system.  Interestingly enough, the latrines were considered a vulnerable aspect of the fortress.  When attack was imminent, considerations had to be made to deter the onslaught, all sorts of nasty organic weapons could be used. Biological warfare!  Probably everyone in the castle was force fed prunes before the attack.  In other words, if someone wasn’t sitting on the latrine at all times, the fort was vulnerable and the kingdom could be breached! 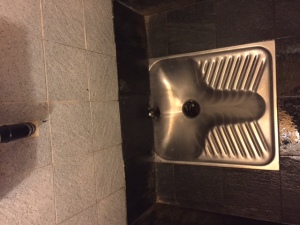 Fast forward to modern day: the Swiss have gotten a heck of a lot better with their state-of-the-art latrines, but over on the Italian side of the Alps, things look pretty much the same as they did in the 13th Century in the Chateau de Chillon. All apparently in the name of hygiene, at least that’s what my Italian friend told me. Yeah right! I’ll take my chances.