We have a lot of surge in Cuba for business for 2016 and 2017.  Everyone got hot on Cuba at the same time.  Now, Cuba is turning into a high-demand, little supply destination.  Hotel rooms are sold out months in advance.  With talk of more restrictions being phased out, the 36% increase in American tourists will grow and grow.

Here’s a brief update on Cuba:

Over 2 million people traveled to Cuba in the first part of this year alone.  There are about 61,000 hotel rooms in Cuba and many are booked 18 months in advance.  Americans still have to travel under a People-to-People status so it is difficult to sneak in and sneak out for a quick weekend in Havana.  Bottom line is that tour operators are starting to turn people to other destinations which is a drag but understandable given the lack of infrastructure and available bednights.  With places like the Dominican Republic and Costa Rica waiting in the wings, Cuba has better get its act together or there will be plenty of hotel beds and not much demand. 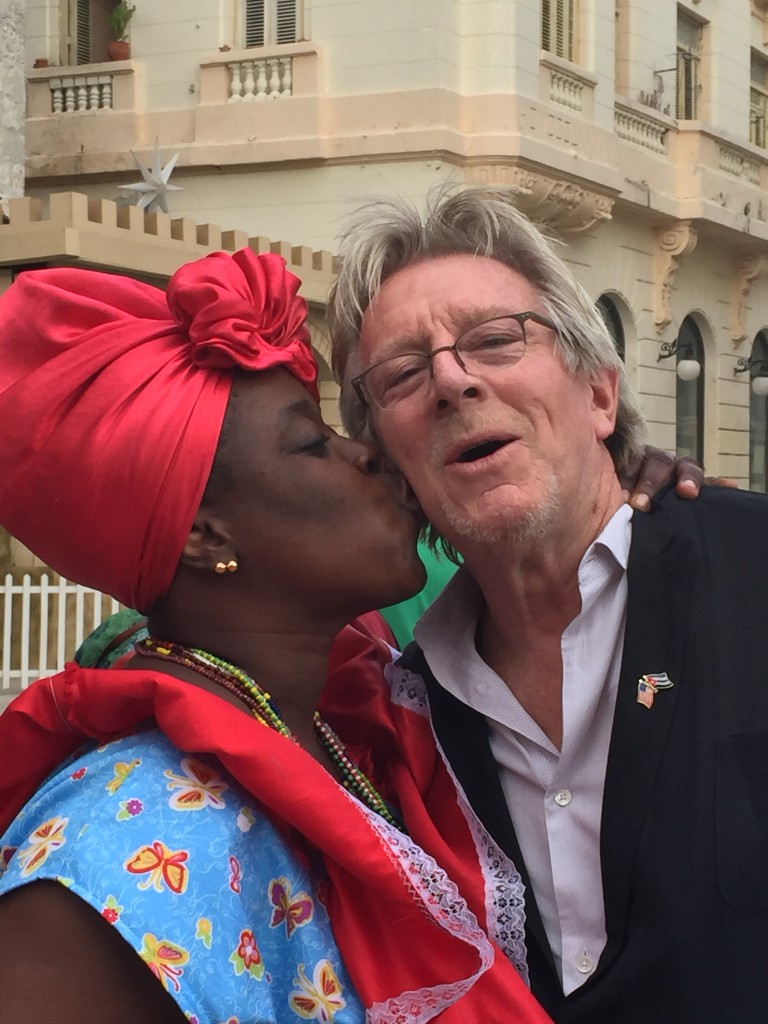 My Israel and Jordan post is coming soon (check Facebook for live updates!) but right now Cuba is everywhere.  2015 is set to be a record breaker in terms of visitors welcomed to the island.  There will be 2,000,000 arrivals between January and July alone; this is a 16% increase year-on-year.  3,000,000 visitors came in 2014.  For the first time in its history, and with the relaxation of rules for Americans, this trend is going through the roof.  Between January and May, over 50,000 Americans legally visited Cuba.

Good news all around?  Well, sort of.  Here is the problem. It begs the question of what Cuba needs. One word – infrastructure.  It is cute to drive in a ‘55 Chevy but there are only so many ‘55 Chevy’s to taxi us around.  Unfortunately, hotels cannot support the boom and they cannot build efficiently and fast enough to absorb this increase.  So what happens? Logjam.  As everything has to go through those old, commie agencies, it’s triple logjam.  This is all before they figure out the non-stop air services from USA cities.  Right now, the island of Cuba could not support a 4,000 passenger luxury cruise line docking in Havana Bay.  There are not enough buses to do the sightseeing, not enough guides to take you around, and not enough restaurants to feed you.

So dear Cuba…please.  You have a great island and probably the most fascinating and beautiful in the Caribbean.  Let’s get organized.  Tourism is great.  But right now, you are too pricy and you have no space. 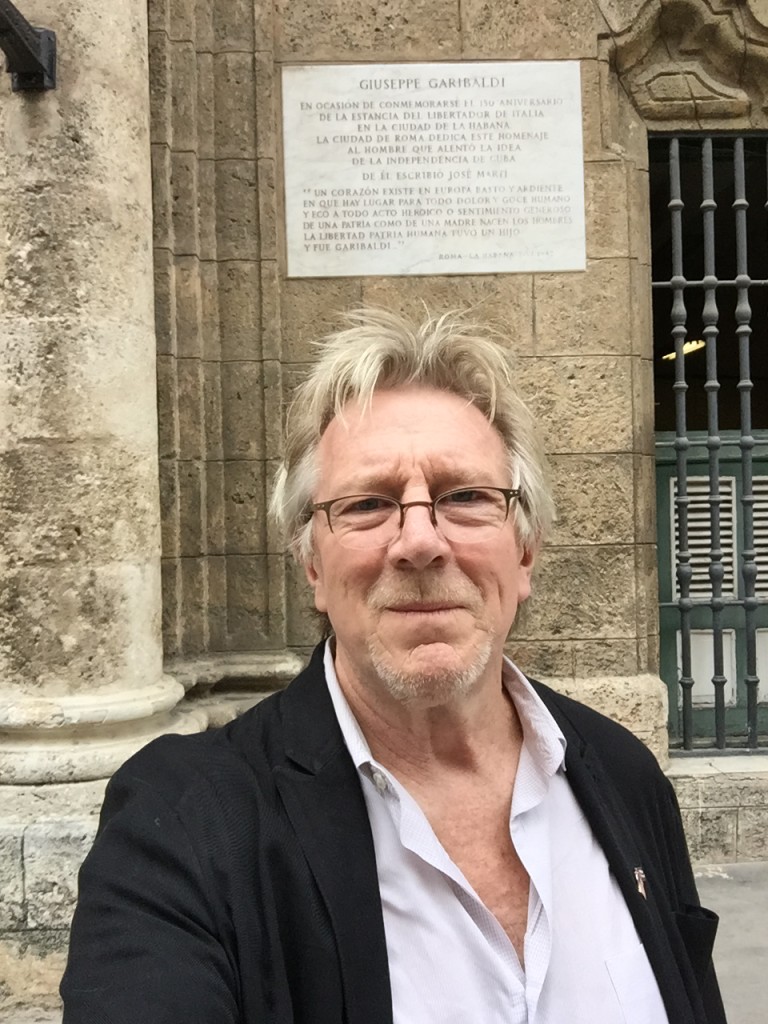 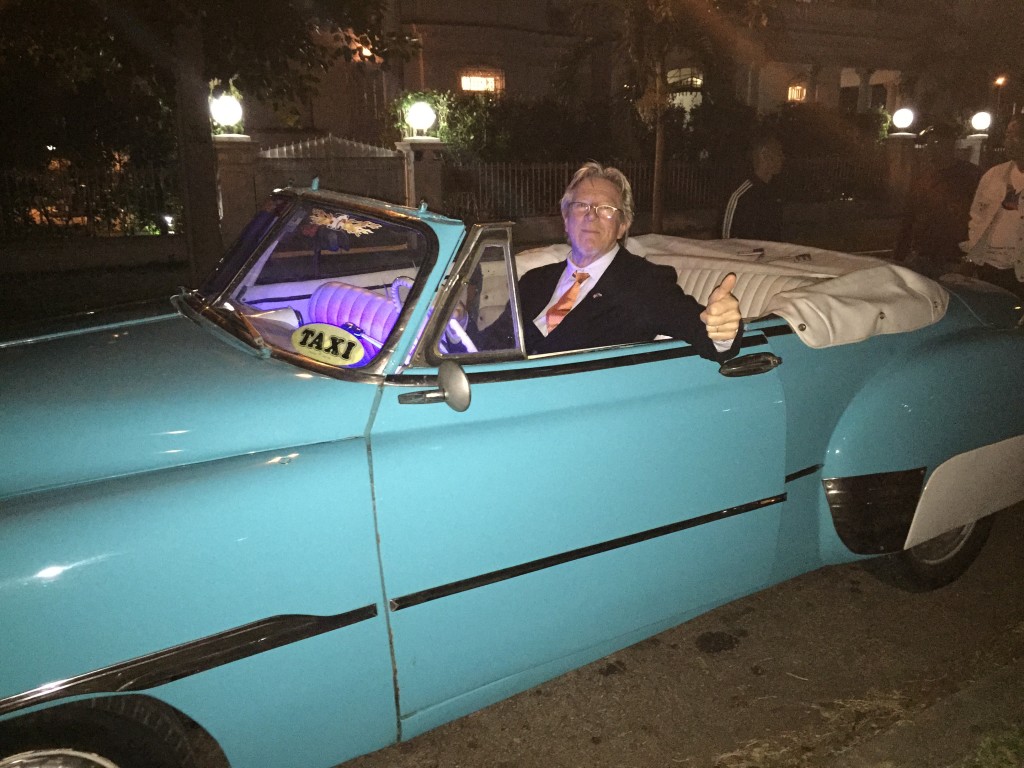 First Impressions
I last traveled to Havana more than 20 years ago. We had set this trip up to begin opening up Havana for our market and to take advantage of a People-to-People exchange program. We boarded our charter in Miami (still the only way for us citizens to get there legally), and went through a minimum of paperwork before we were heading down the runway for the brief 45 minute flight.
Havana is 105 miles south of the Florida Keys. With the Bahamas out on the eastern side, we soon came in across a very green island. In winter it reminded me of an Irish landscape with sun! We were flying over Cuba. We touched down in Havana airport and I was like a kid in a candy shop. We were here! Havana awaited us.

Crossing Over to Cuba
It is a strange phenomenon to cross the prohibition line. Cuba has been under an embargo for too long and even with Obama’s announcement, much work still has to be done. The changes I have noticed since the last time seem minuscule, but incremental and positive. They have lost their partner in the old USSR, and trading partners either come with fool’s gold in the form of glamorous seaside resorts that take rather than give, or oil rich countries that are watching their profits and their political systems become undermined…Venezuela. So how would it seem!

Revolution Square looked the same: a stark socialist, open and unfriendly square with the requisite poster of Che looming in the background and José Julián Martí Pérez, on the opposite side. The cars had become a little more mixed, but still the overwhelming impression of the auto landscape was as it was: an amazing museum-like collection of Chevys and Cadillacs, from a time when America could boast that we had the greatest designs in the world. As they say here, Chevy ’57 on the outside with a decidedly mysterious under the hood DNA; bit of this and a bit of that, beautiful colors and steering wheel stick shifts. Aha. Those were the days.

In the old part, buildings were getting attended to. That was different. The city of Havana was cleaning up! It was vibrant, as culturally rich as any great city in the world. Museums that may be crumbling on the outside were full of incredible art inside. The icons of Havana were spilling over onto T-shirts and memorabilia. Hemingway drank here, ate there, slept over there. The glory days of decadence during the mafia heyday were ambient in the jazz bars and clubs that came alive at night. The music scene was loud and wonderful. Classical, jazz, choral, all spilling over into the streets. Vendors were selling their wares, which consisted largely of stuff that had some connection with Fidel. The Parliament building where Fidel took the government by storm is left as it was that day in 1959. Glorious hotels like the Saratoga (http://www.hotel-saratoga.com/), which sits opposite the Senate building (that is modeled on our senate building) are worth a visit.

And everyone needs to walk along Havana’s postcard-inspiring boardwalk, the Malecon. Though perhaps not the day we were attempting to stroll there! The winter seas were high and they were diverting traffic to prevent cars getting washed away. The central square, Plaza de Catedral, is magical. It reminded me of the main plaza in Cuzco; strong Spanish colonial architecture and built to last the centuries. It is an amazing sight at night. Havana is safe with oodles of enriching cultural things to do. If you want to get down with Cuba and speak with the arts or press community, it’s a done deal. Cuba awaits!

Timing is everything. We’re on our way to Cuba. I won’t say that our bags were already packed, but our tickets were booked when Obama surprised the world (and us!) with his announcement. It has all the intrigue of a best-seller – secret talks for months, even the papacy is involved…and just where is Fidel? Hey, this is long overdue! Obama is on fire for his last two years! And we hee Cuba Calling.

I last visited Cuba so many years ago I can’t remember, and in those days you could use dollars instead of Cuban pesos. And what will be the consequences for Cuba of lifting the ban? More Americans for sure, although over a 100,000 Americans visit Cuba each year, either legally or illegally. We’ll be flying from Miami on a charter flight and we can bring back, legally, $400 in Cuban cigars. No more sweating at the airport going through customs with those Cubans innocently packed in your backpack! And imagine, in the not too distant future we’ll be able to use credit cards and not carry bundles of cash around with us.

Here is the delicate balance that Cuba needs to strike. The US has been in fast-forward, meanwhile this island just an hour flight from Miami has remained unchanged. There is speculation that Cuba will become the new Cancun – let’s hope not. Let’s hope they take everything that’s good about modernization – without disrupting the old world charm that makes visiting Cuba so great. How do you avoid the mess and all that you get through overdevelopment? And remember, that none of this stuff is going to change overnight.

I could just see the auto industry salivating at the prospect of getting into Cuba – but Cubans need money to buy cars and the most important thing is to invest in the Cuban people, not the foreigners who are apt to move in, make their money and leave a whole bunch of people in pretty much the same situation as they were before. Smart tourism investment is key. 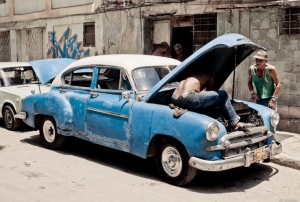 And what would we miss once this thing starts to happen? Well, the cars. The average lifespan of an American car is 16 years; the average lifespan of a Cuban car is 60 years! And Castro’s 1959 revolution came at a great time for American cars, which is why the streets of Cuba, and specifically Havana, look like a car museum. Imagine if the Cuban Revolution had taken place in 1971 – it would be a Ford Pinto graveyard!