I am in two minds about graffiti.

Sometimes it is just senseless destruction of beautiful facades but more and more it gives voice to a neighborhood in change and transforms organically into art from Banksy and beyond.  Graffiti stretches back through the ages.  It comes from the Italian word “graffiato” which simply means scratched. It really starts like a primitive text message that hasn’t been deleted or expunged from the memory of the ages and it pops up on everything, especially Roman (usually with a clear statement and cause).  It is found in Egypt, in Pompeii, in the ruins of Greece and Turkey, and in the tiny odd corners of Rome.

Recently in Rome, I took a little excursion based on an article I read in one of my favorite magazines, The World of Interiors. I headed to Testaccio which is close to the Protestant cemetery where Keats is buried and the Pyramid of Cestius by the Porta San Paolo.  The pyramid is actually the only surviving Egyptian pyramid in Europe.  It was built around 18 BC by some mad egomaniac who thought he was a pharaoh.  Ego was in high supply during that period.

Testaccio, the Roman neighborhood that sits just behind the pyramid, is going through a bit of a Renaissance.  New restaurants are popping up around what used to be the ancient Roman rubbish heap on the Eastern banks of the Tiber, now known as the Monte Testaccio.  It developed some notoriety in the 1950’s when the filmmaker Paolo Pasolini sat at the top of this rubbish heap of remnants of old roman vessels that carried olive oil for a photograph.  Now this area is a mix of trendy, bohemian, and authentic Roman.

My friend and fabulous Roman guide, Carlotta Boldrini, lives around the corner from here.  Her hood now boasts a new painter on the block.  The article was about these huge murals by Agostino Iacurci. While former markets and factories in Ostiense and Testaccio are transforming into trendy, gentrified eateries, cafes, bars, and apartments, this wonderful artist has pulled together the scruffiness and the neglect of a rundown neighborhood in the process of change and intertwined it with his sensational murals.

“As an artist, working outside deprives me of that air of sacredness that you associate with works in a museum,” he says.

Agostino takes on the role of integrating his art into the neighborhoods in spectacular fashion.  His art is big and sits above everyday Rome with warts and all.  His murals are as offbeat as a swimmer with cap and goggles above a fish shop. His equipment is simple: A sponge roller, a cherry picker and simple masonry paint. One day maybe some 2,000 years on, we will find some faded fresco by a huge skyscraper near a tiny pyramid and lament that Rome was once a city that you could walk around and get a decent coffee in a neighborhood bar. 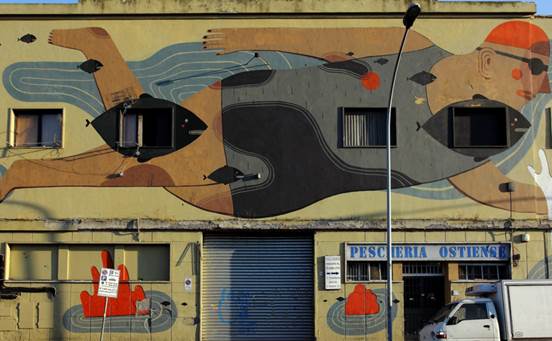 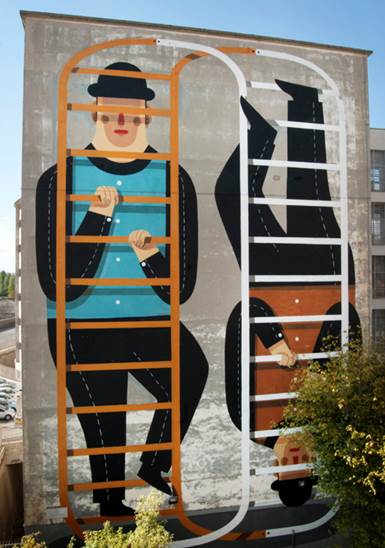