On a recent trip to Athens, a city I had not been to for several years, I fell in love with the place once again. Athens has a great beat to it, and it was super cool staying at the top of the Plaka by Syntagma Square at the Hotel Elia Ermou. The traffic was insufferable, but once the sun dropped down, the city became a magical place that had a skip to its step. We ate at some great restaurants (including rooftop ones), I became further addicted to grilled octopus and Greek salads, and I even fell back in love with moussaka. I got to have lunch at the Benaki Museum with a wonderful friend and ex-art teacher that now lives in Athens, the delightful Polytime Costes. 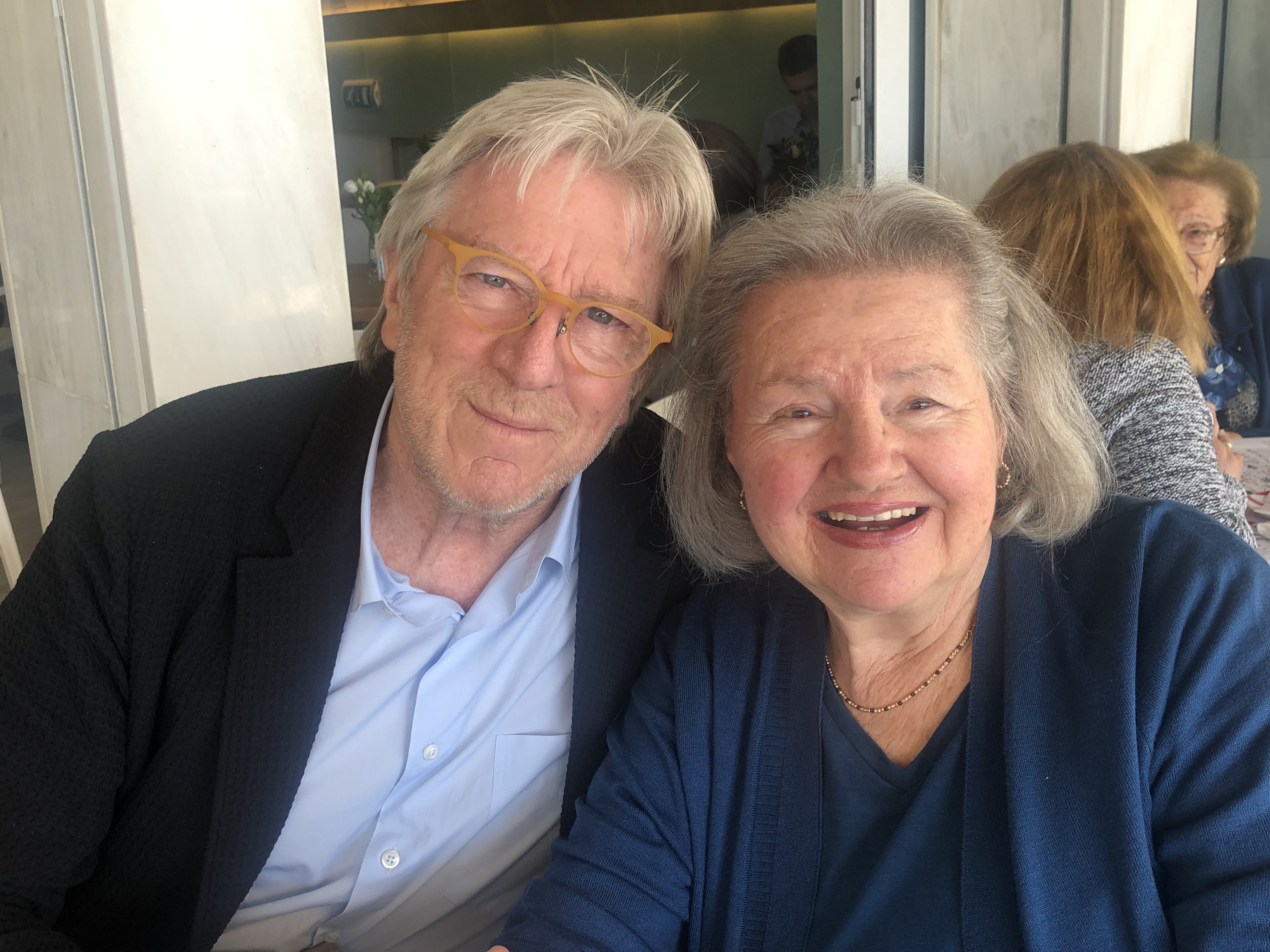 The highlight of the whole visit was taking a sunset Segway ride around the top of the Plaka and along the pedestrian walkway that leads to the Acropolis. The Segway is a strange machine – in part because the guy that invented it had an accident on his Segway and died! Yikes! So everyone, including me, felt a little trepidatious! Once you get the hang of it though, it is an empowering experience. It literally turns on a dime, it has a decent speed to it, and it enables you to move with the walkers and ride with the bikers. Sightseeing on a Segway is just about as good as it gets. We all wore helmets in case you are wondering! 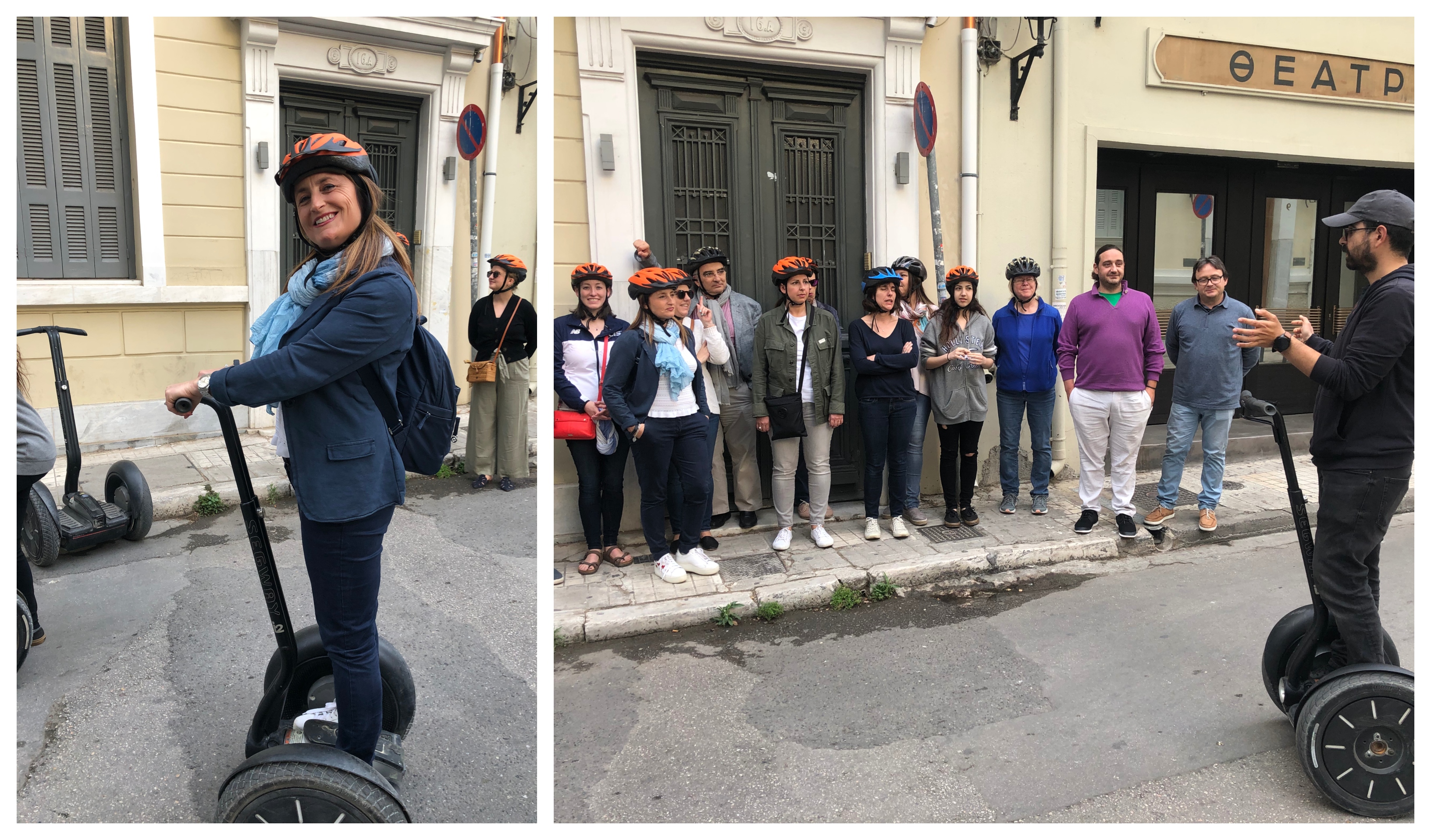 When I think of great cities, I always think of that perfect view – like the Alhambra in Granada from the Sacromonte and Palatine Hill in Rome from the Aventine – but in the end, there is nothing quite so dramatic at sunset on a clear late spring evening before the heat of the summer takes over as the view of the Acropolis. The most dangerous part of the journey was climbing off of the Segway and clamoring up the slippery stone hill to get the last dramatic shot of the sun across the limestone temple with all of Athens below and Mount Lycabettus in the distance. Stunning. 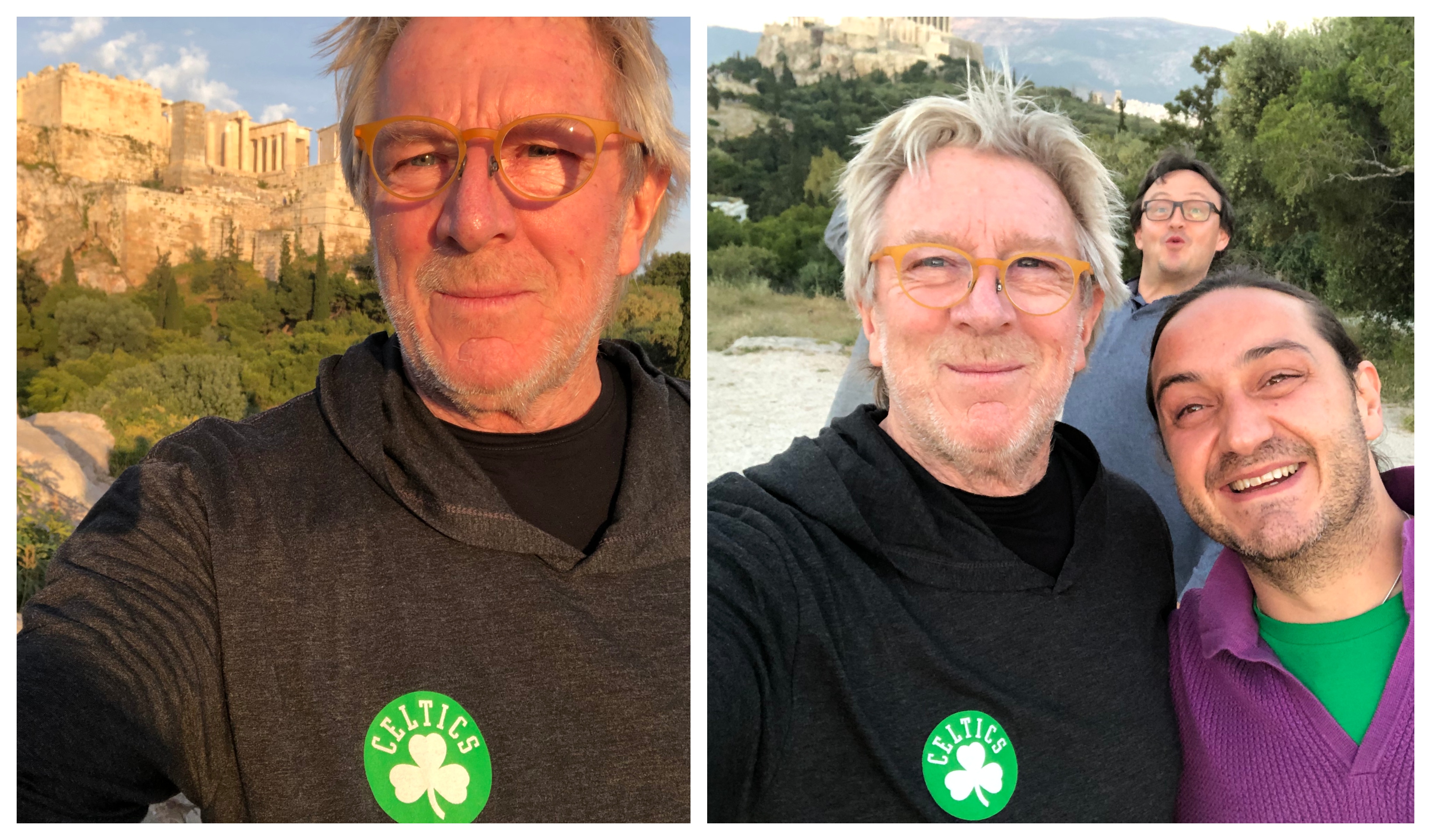 On the journey back, the lights had turned on and the Acropolis treated us to another view. In some ways, it is even more spectacular than the sunset. We passed by the Acropolis Museum at the foot of the hill which is a must-see museum for everyone that goes to Athens. I stood on my Segway and peered through the glass exterior and looked at the collection of statues and heads and faces inside. I swiveled the Segway and looked up at the Acropolis. An amazing moment. Antiquity at its best. 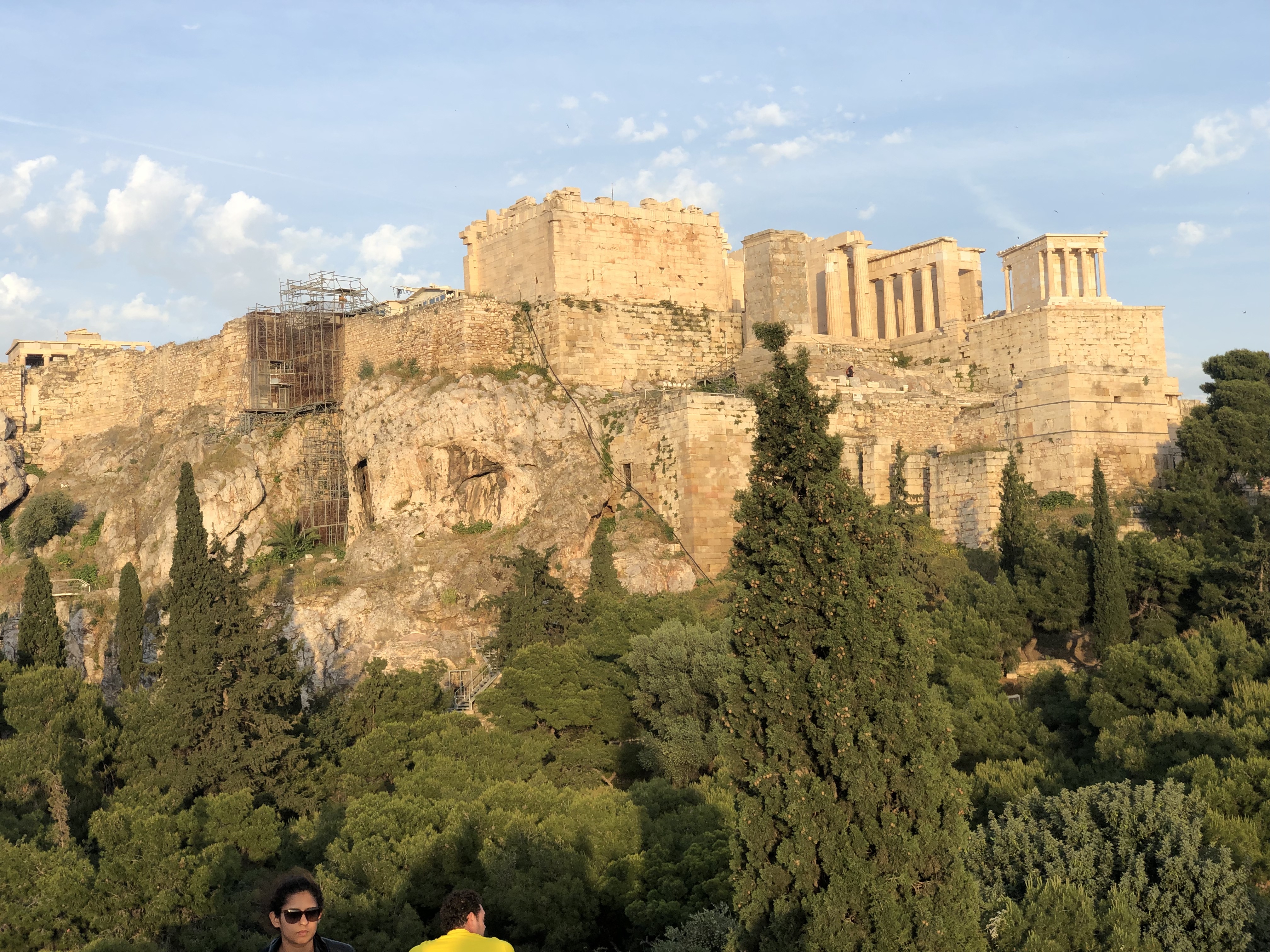 If you are planning on doing a day trip from Sarajevo or Split in Croatia, there is really only one place you should think about, Mostar. We were based in Sarajevo for a few days so this was a natural break for our team. We also wanted to visit Tito’s Secret Bunker. Sarajevo to Mostar is around 2.5 hours – from Split it’s a little longer.

Who would ever guess that hidden in the forest around an hour away from Sarajevo near a town called Konjic, Tito, the former president of former Yugoslavia, was so convinced that the nukes would be flying that he decided to have a nuke-proof bunker made for him. The project started in the early 1950’s and was completed in 1979, one year before Tito’s death. It was built during the height of the Cold War and was designed to essentially withstand a bomb the size of Hiroshima. It ended up not being much good because by the time the bunker had been completed, the technology for nukes had far superseded the impact of the first iteration of nuclear bombs. Still, he was determined and so convinced there was going to be a war that he built a series of tunnels that could not be detected from the air. They were completely off the grid and this was a state secret that only became public knowledge after the breakup of Yugoslavia in the 1990’s. It is still guarded by the Bosnian military although today it is used as an art exhibition center and a fascinating look into a world that no longer exists. It literally is a time capsule. The people that built it almost certainly “disappeared.” In today’s dollars, it would cost around $26 billion. That’s an awful lot of money for an art installation! There was room for 350 people (family, friends, and military advisors) to live and work and enough food storage for six months. 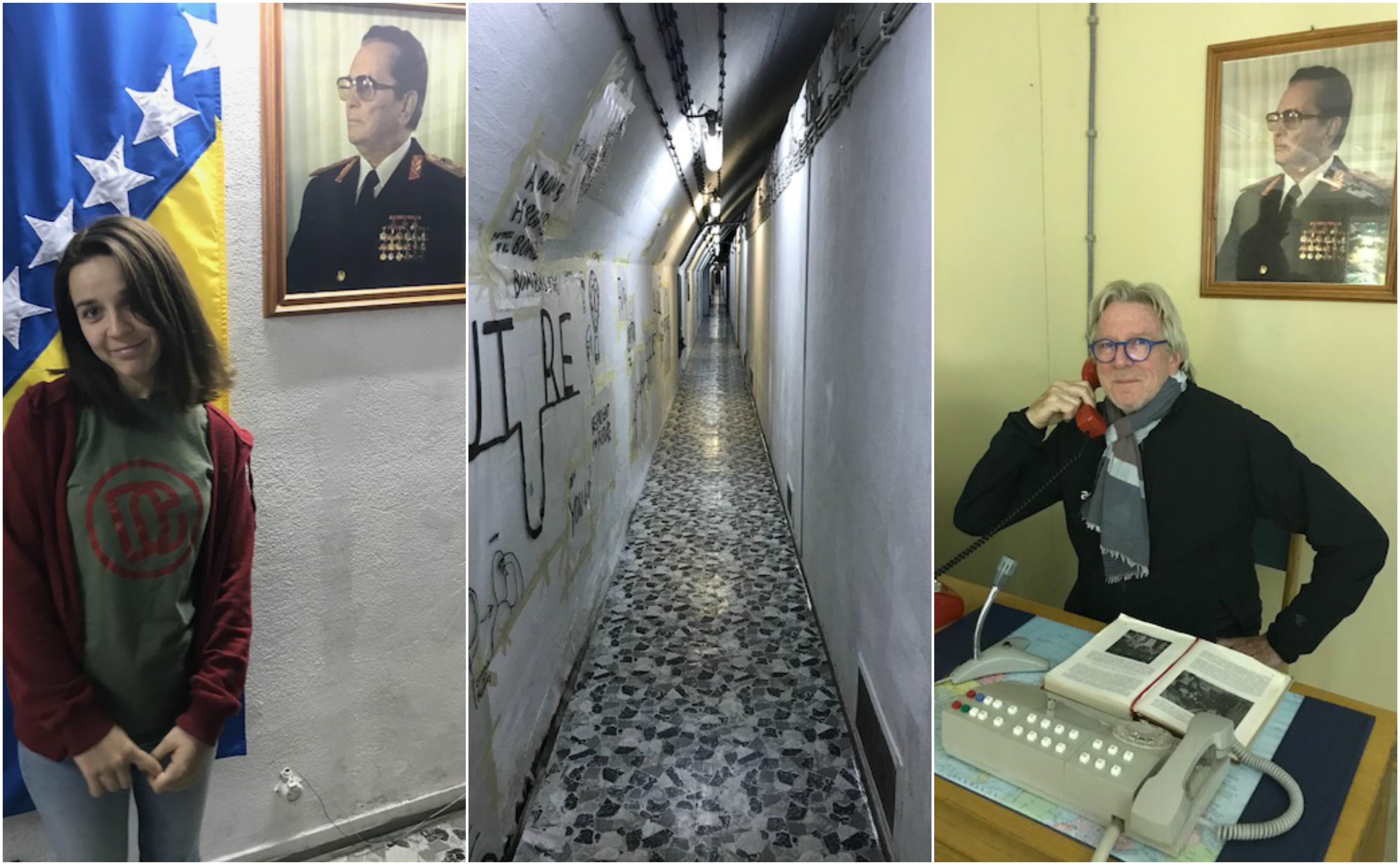 Entering down the 900 feet through the labyrinth is a bizarre experience. Everything is exactly as it was with the old phones and the Telex machine (it looked a little like our office in 1979!), there were pictures of Tito on the wall, and giant refrigeration and heating generators. Even today, you need to have a pass to get in. There is a security officer that controls the flow of tourist traffic (incidentally there is hardly any) and you need a guide to walk you through the tunnels lest you get stuck in there and everybody goes home for the night. This was a trip, literally. Room after room reminded me of a grandiose version of Churchill’s War Rooms. I loved it but I could not wait to leave. I was getting claustrophobic and we still had to get to Mostar. It’s a must see.

The City of Mostar 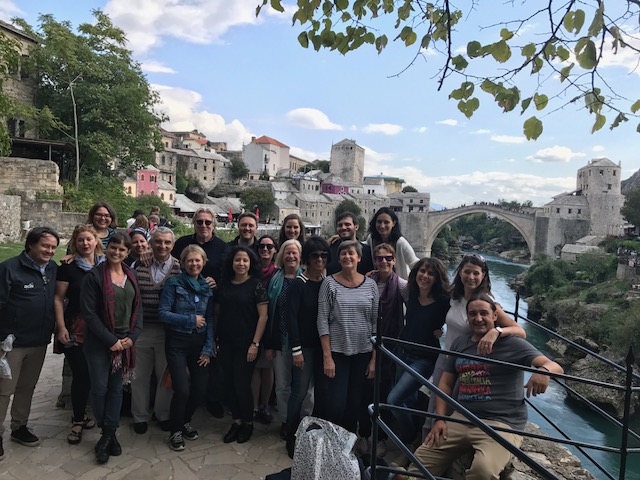 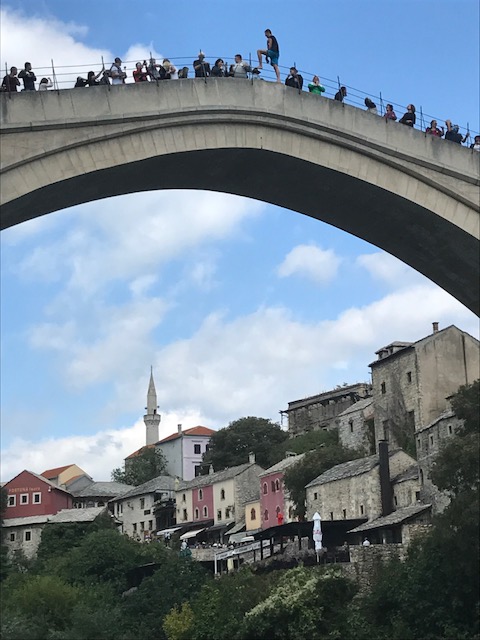 The journey to Mostar through wine country was beautiful but nothing could quite prepare us for the walk down to the Neretva River. There was the famous bridge, the Stari Most. According to popular legend, the name Mostar actually means ‘bridge keeper.’ The bridge was built under the auspices of Suleiman the Magnificent in 1557 and replaced an older wooden suspension bridge that was, allegedly, pasted together with egg whites and pins. Anybody that dared to walk over it risked their life. During the Croat-Bosniak War, the bridge sadly became a victim of warfare. As it was such an iconic site in the city, it was reconstructed using the same local stone that the original bridge was based upon. The entire area of the town on both sides of the bridge including the old bazaar was also reconstructed.

The bridge is one of the great sites of the world. Bizarrely, it’s also famous for its diving competitions and the Red Bull diving competition has taken place on this bridge. It’s scary. We had set up an arrangement with the local dive school in Mostar. There is an annual local diving competition held yearly in mid summer where it’s traditional for expert divers to leap off the bridge. It is 60 feet high and the divers dive into a relatively small, deep patch of freezing water where it’s only 12 feet deep. The complication for divers is that it’s cold, it’s high, and you have to shallow dive otherwise it’s bad news. We had organized with one of the divers to show off his expertise and it was quite a breathtaking moment to see this guy in a wetsuit making the jump. 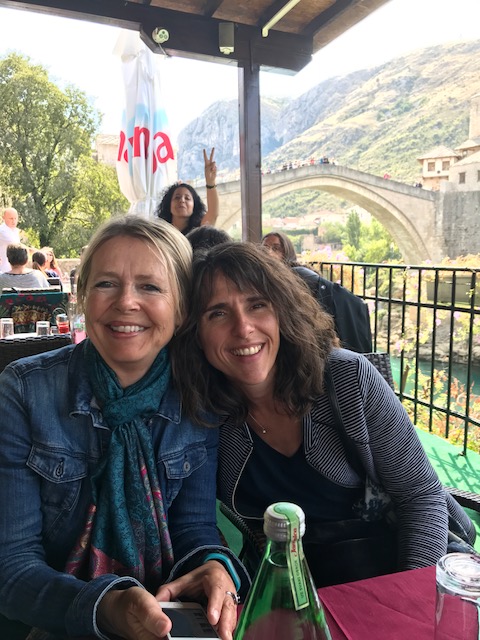 More than 2,000 people lost their lives in the conflict in Mostar. The constant bombardment was one of the most intense outside of Sarajevo during the Yugoslav Wars. Walking through the reconstructed bazaar today is a delightful shopping expedition. There are restaurants that cling to the cliffs with incredible views back across the bridge. One of the most spectacular views of the bridge is from the top of the mosque. But because the stairway is tiny, it can be super claustrophobic. The best thing to do is to have a small person go up and have them take a picture for you if you happen to be A) Claustrophobic or B) taller than 5’10”. 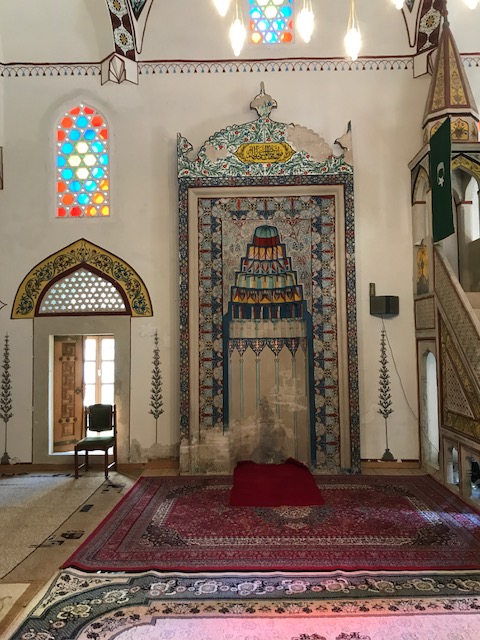 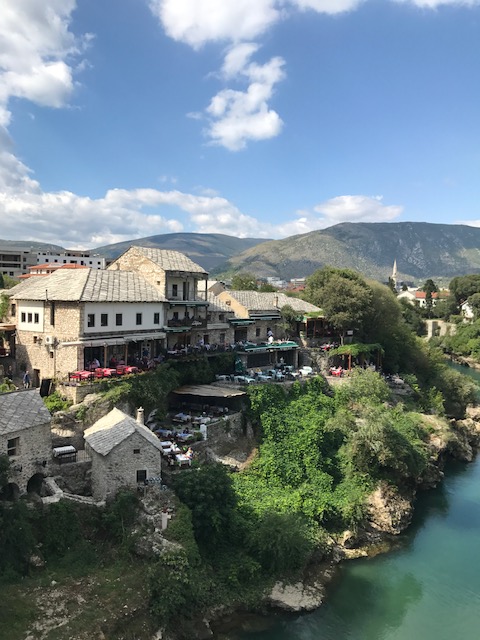 This is a great town to hang out in, shop, take lunch, but if you can overnight here, it’s super cool because literally the daytime tourists spill out. And there are lots of daytime cruise tourists coming in from Split.