It’s the start of soccer mania.

The greatest game in the world is everywhere this summer. There is the Copa America in the USA, the European Nations Cup in France, and not to mention soccer at the Olympics in Brazil.  This is definitely a summer for los fanáticos.  Carried live on TV in the USA, there is not a day that goes by when some important game is not catching the eye of the devotees.

But there is a dark side to soccer as demonstrated recently in the beautiful port city of southern France, Marseille.

The ugly side of ultra-nationalist thugs fighting against an opposing teams’ army of thugs or tearing apart local restaurants and bars and fighting with the police.  It should not be this way but soccer quite often has a dark side.  This summer it has again reared its ugly head.

When we choose to travel, we travel to open our minds, embrace different cultures, take a chance on speaking a language that we are unfamiliar with, and get close to the sights and sounds of a place that is unfamiliar.

In brief, learn and enrich yourself with the tools of the trade – tolerance, openness, and kindness.  With this, and a guide book or willingness to get lost, one can take a chance with a phrase or two, and get to meet people from different places with different languages, different religions, and different perspectives.  When I see the dark side of soccer, I see such a misconnect between the beautiful game and what this ultra-minority of racist hooligans take from the sport.

Here’s the deal – it’s not their sport, it’s our sport.  Prejudice in any form is a terrible waste of life.

I will sit back, watch the games, marvel at the moves, enjoy the backdrop of beautiful cities, and know that there is nothing wrong with supporting your nation. But that has nothing to do with being an ultra-nationalist.  No wonder they banned alcohol in the cities where the hooligans are heading.  What right do these guys have to paint the Russian or English fan on their drunken bodies?  Shout out against all forms of racism and fanaticism.  You never know, it could be happening at a place near you!  See you out there somewhere. 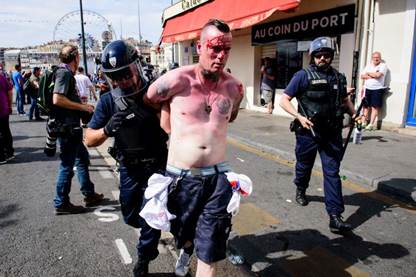