The other day I was reminded of what a century can mean. My uncle passed away at the amazing age of 103 last week. I got to interview him about three years ago in his apartment near Regents Park. I was curious about his travels and war time experiences. We chatted about his life in London as a child, my Dad, his family and travels. We talked about the London fog and smog and his lovely wife and partner, Rhoda, while drinking cups of tea with biscuits to keep us going on our journey through time.

As it turns out, he had traveled extensively during the war. He just hadn’t mentioned it to anyone! He told me about his journey on a merchant ship across the Atlantic, his fear of submarines (but not sea sickness!) and his stay in Brooklyn at the Brooklyn Navy Yard. It was funny because I had traveled across the Atlantic on the Queen Mary a couple of years before and the ship departed from the Brooklyn Navy Yard. I recall that the journey across the Atlantic was stormy and there was lots of sea sickness on board. I remember the grey emptiness from horizon to horizon. I tried to imagine how a 20-year-old kid sleeping on a hammock would have dealt with that journey and the paranoia of a submarines here or there. His first glimpse of the Statue of Liberty. Ellis Island where all those weary travelers had arrived and sought a new life. His first glimpse of Times Square. I thought of Anchors Away and Gene Kelly, the towering Empire State building. He loved the USA.

And then the train trip across the USA. To Chicago and then onwards to San Francisco. A week on a train across the USA. A bunch of kids in the middle of a war that would change the face of Europe for 50 years. His first glimpse of the Golden Gate bridge, the West Coast. Chinatown. Imagine. He was part of a group of twenty-year-old’s traveling across the USA in 1941 to pick up a French Reconditioned Cruise ship (converted to an aircraft carrier) and then heading down to San Diego tracing the shoreline of California. They spent some time in San Diego, to allow finishing touches to the hastily assembled carrier before heading south and passing through the Panama Canal. Pacific to Atlantic! Then the treacherous journey back to England protected by the comfort of a convoy and several destroyers. Several boats were lost across the Atlantic. Many men lost their lives. And then, back to Portsmouth. And home. He had been away nearly a year. He had helped deliver an aircraft carrier to the British Navy and went onto minesweeping off the east coast of Scotland.

When I look back on that conversation, I wished I had more time. I had thought up more questions. He had been born at the very end of the first World War, the start of the Russian revolution and in the middle of Spanish flu pandemic that claimed 50 million lives worldwide. He had witnessed a century of changes.

He lived a long enough life to enjoy his grandchildren and his great grandchildren. He grew up over the trendiest shoe shop in all of London by Camden Town Tube. Now called the British Boot Company specializing in Doc Martins and having as its most famous customers, punk groups The Sex Pistols and The Clash. The shop owners knew him well as he popped in from time to time on his way to the local supermarket.

Even when he was 102, his electric scooter provided him with a means to get out and ride along familiar streets. He was a Londoner. And in the end, he got to see a ravaging pandemic that would take nearly 11 million lives. He was one of them. 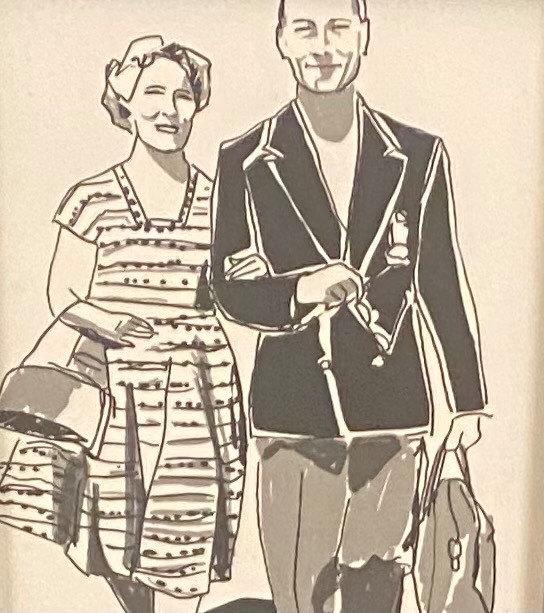 This illustration of Bill with his lovely wife Rhoda was done by Gayle Kabaker in celebration of his century.   To see more of Gayle’s work please visit:  linktr.ee/gaylekabaker